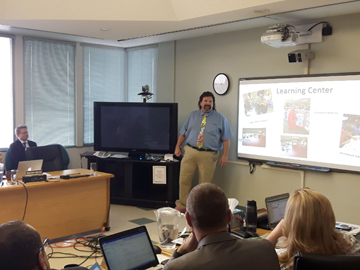 Foremost School’s principal and vice principal both presented at the Jan. 9 Prairie Rose School District board meeting.
Jay Diemert, the school’s vice principal, spoke of what makes Foremost a unique place to be educated.
He began by highlighting the school’s extensive sports program, which includes baseball, running, golfing, curling, volleyball and basketball.
“There are lots of banners in the gym to show the championships, but the kids will till you it’s the experiences and memories of playing sports that’s the most important part,” said Diemert.
In addition to industrial arts and food programs, the school offers a “social games” program that emphasizes human interaction in the digital age.
“Social games is a program where the students get the electronics out of their hands and they have to talk to each other. They learn skills about sharing and leadership, taking turns and being nice to each other.
“(Skills that) in some areas, that have really slipped in our society,” he said.
Diemert, who’s worked at Foremost for 21 years, said the entire school is a cohesive community, from preschool to high school.
“This is not an elementary school, a junior high and a senior high school,” he said. “It is one school from pre-K to 12.
“I’ve been in a lot of bigger centres and bigger schools and you don’t have the same feeling.”
Principal Simon Moreton has been in his position since the beginning 2017-18 school year.
He said he brought over a robotics program from his previous job with the Frontier School Division in Manitoba.
The school uses Lego Mindstorm, a set of programmable robots, to learn the fundamentals of robotics.
“It’s very important for the culture I’m living in now in Foremost,” said Moreton. “They’re implementing it in farming and agriculture. It’s what our students understand.”
Looking towards the future, Moreton sees Foremost participating in provincial, national and international competitions, whether in robotics, math or science.
“We have to promote Foremost,” he said. “We have to promote the good stuff that our students are doing, and in order to do that we have to enter into, let’s call it, friendly competition,” he said.
The school is also working on completing its chemistry lab, an outdoor classroom, staff handbook and improved data analysis.