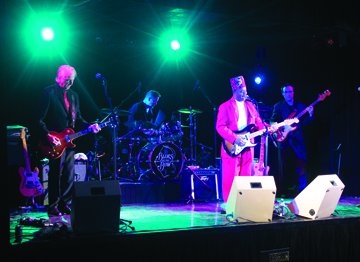 Blues enthusiasts packed the Bow Theatre to watch Chicago’s Lil’ Ed and the Blues Imperials rock the night a way with their lively brand of dancing blues tunes on Feb. 3.
The band has been around for almost 30 years and is fueled by Lil’ Ed’s rollicking slide work and deep blues, string-bending, rough- edged stage performance.
The blues stylings of Lil’ Ed (Williams) come naturally.
His Uncle and Chicago slide guitar king, J.B. Hutto, taught him how to feel and not just play the blues at age 10. That approach appeared to work, as many consider him to be “the giant of the genre” after nine albums and thousands of shows worldwide.
“I played clubs by night, westside clubs” said Williams.
“People would see me and they’d talk to other people and I guess that’s how it happened. Music makes me happy and happiness is a good thing in this world today.”
He also sings gospel at his church on top of his blues gig.
Small clubs are where Williams feels most comfortable because the band is closer to the people, whereas in big clubs intimate interaction becomes a more difficult task.
“It’s very important, because if I notice a fan looking at me and he’s happy because I’m happy, that’s a good thing,” he said.
“And it makes me even more happier to see that and it makes get a little more crazier as well.”
The band play the “Boogie Blues” every night because it allows guests to dance.
Blues will never die, according to Williams, because people are noticing the music more and realizing its lyrics are from the heart and not a mechanical type of music.
“It’s been a great ride,” said second guitarist Mike Garrett, who has been with Williams almost since the beginning.
“The people I get to play for and meet. And just all the places it has taken me around the world and without having to join the navy.”
Growing up in Detroit, he had two older siblings who used to bring records home, including Jimmy Hendrix, as well as some Motown and soul music.
But it was when his brother brought home a Freddy King record that music became Garrett’s passion.
“I was thinking, ‘Wow, that is what I want to do,’” he said.
Kelly Littleton found his way into the band through Garrett, who he grew up with in Detroit and when they were looking for a drummer, his style fit the criteria.
“It’s high energy, danceable stuff,” said Littleton.
“A drummer’s job is kind of to orchestrate the band in a way and (to be) a time keeper of course. My whole thing is trying to get people dancing.”