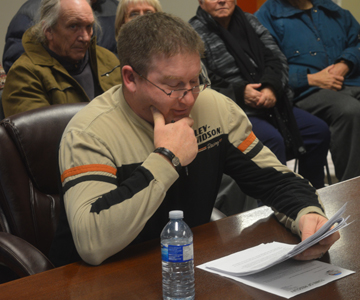 Jeff Grey spoke in front of a packed house at Redcliff town council to express his concerns with the proposed curbside recycling program.

Redcliff town council unveiled details of its upcoming curbside recycling contract, which include 7.7 per cent in cost savings during the system’s first year, at its Feb. 12 meeting.
The projected savings will increase to 22 per cent in 10 years, according to the data provided by town administration.
Still, some residents remain convinced that curbside isn’t the way to go.
The council chambers were packed with around 40 opponents of the changes.
Two residents — Jordan Weiss and Jeff Grey — presented to council expressing their concerns with the new system.
Weiss also submitted his petition opposing curbside, which had more than 500 signatures.
They each posed a litany of questions to council regarding the new system, such as its total cost, how it will work on apartment buildings, who will be liable in the event that the bins cause property damage and its impact on senior citizens and the disabled.
“We’re asking council to advise us of the reasoning behind the decision to make these changes,” said Weiss.
Grey said he’s not against recycling, but is opposed to mandatory curbside collection.
“There are other options (than) curbside, such as centralized recycling areas, or to add to our existing back alley bins, which we already own,” he said.
Afterwards, municipal manager Arlos Crofts and Mayor Dwight Kilpatrick responded to their concerns by providing as much information as possible, including the projected savings, while the proposed contract is in its final stages of negotiation with Can Pak.
Crofts, reading from administration’s prepared response, said that apartment and condominium complexes will have their own larger, separate bins for residents to put their solid waste and recycling in.
“There may be some scenarios that merit case by case consideration,” he added.
Any damage done to property or the bins by the contractor “shall be repaired or replaced by the contractor,” said Crofts.
He said there will be programs to assist the elderly and handicapped, which will require the town’s pre-approval.
Kilpatrick said council went with the curbside option because it was more cost effective than the alternatives examined.
“The numbers just look better,” said Kilpatrick. “That’s why some of us voted for this.”
Having mandatory curbside recycling will encourage people to recycle, whereas the current system of back alley bins doesn’t, he added.
“When we looked at this, it just made sense,” Kilpatrick said. “As council, we need to do what’s best for the majority of the town.”
Council is slated to vote on the new system at its Feb. 26 meeting.