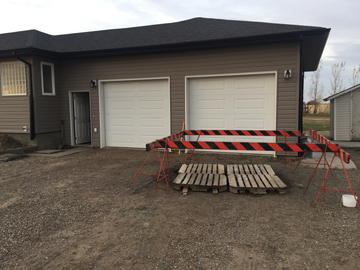 In October 2017, County of Forty Mile Coun. Chantel Timmons discovered a secret well under her driveway through a routine inspection from Atco.
The problem is that well is leaking methane, which is potentially hazardous.
The house was built in 2012 on property that has been owned by Timmons’ family for since the early 1970s.
“This well is not on any land title,” Timmons said.
“There’s no way that anybody can say that they would have known about it.”
Ministry of Energy spokesperson Mark McKinnon says the well was registered with Alberta Environment and Parks by a previous owner, although its precise location isn’t identified.
After discovering the well on the Timmons’ driveway, Atco contacted somebody from the Alberta Energy Regulator’s Medicine Hat field centre, who said they would be in touch with Timmons.
“We put four simple barricades around the outside of this six-foot deep hole, which is probably eight feet around,” said Timmons.
“We put pallets on top of the two-by-fours and that was supposed to keep my animals and my children safe.”
She still hasn’t heard back from AER, so the barricade and pallets remain in place.
The effects of the methane are difficult to detect.
“There is no odour, because the odour is added to natural gas after it has been (extracted). Atco actually adds its own odour so people can detect it,” she said.
“Methane is flammable and this is two metres in front of our garage. We were told when they originally found it (that) there was methane in our garage and basement.
“We were told that the levels are so high in the garage that they would be able to light it on fire.”
Timmons reached out to Minister of Energy Margaret McCuaig-Boyd on Twitter, as well as the AER and Minister of Environment and Parks Shannon Phillips.
Only McCuaig-Boyd responded, saying that the ministry is working on a solution, but that Timmons’ situation is unique and will take more time than usual to solve.
Cassie Naas, a spokesperson for AER, confirmed with the Medicine Hat Field Centre that they had been in contact with Timmons, but said that it’s out of their jurisdiction.
“Because the well was drilled for domestic water purposes, it falls within the jurisdiction of Alberta Environment and Parks,” she said.
“The AER’s authority is limited to regulating development of oil, bitumen, natural gas, coal and the pipelines that transport these products within Alberta.”
However, McKinnon said that “regardless of whose jurisdiction it is, we’re working to identify the best solutions to assist the Timmons family.”
Since the circumstances are unusual, the offices of the Minister of Energy, Minister of Environment and Parks, and AER are working “to provide coordinated assistance (to) prevent the family from being redirected from one department to another,” he added.
AEP was unable to respond to a request for comment by press time.
“Something needs to be done,” said Timmons. “I don’t think it’s fair to say it falls on the landowner when it is somebody else’s mistakes and poor documentation that has caused the problem.”