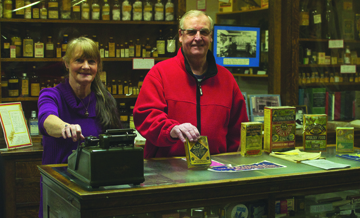 History has been a passion of Alex and Margaret Grant’s lives that has landed them to the opportunity to take over the Redcliff Museum in November 2017 from Vi Rieger.
In 1981-82, Alex was an archivist with the British Military who took over a regiment headquarters where artifacts were handed in by families that dated back to the 16th century, but were never recorded and no one knew their insurance value.
Alex catalogued the artifacts over the two years he was there and that is where his history knowledge heightened.
The Grants moved to Canada in 2005 and it was not until 2009 that Margaret went to the Redcliff Museum where she had numerous discussions with the summer student, Antonia, about the museum.
Margaret then began her research where she discovered the Van Wert family, who had businesses all over town from 1935 onward.“ By connecting with Antonia that summer, we decided that we would become board members of the museum,” said Alex.
“At that particular time I was working for the Medicine Hat Police Service as a cell guard. I didn’t realize that I wasn’t going to be able to attend all the meetings. We resigned from the board.”
Alex retired last March and he had spoken to Fred Hauck last summer, when he asked if Alex was going to apply for the job.
Alex said, “No. we’ve already got somebody in there.’
However, Hauck replied that they had not filled the position at the time.
Alex then spoke to his next-door neighbour who happened to be the vice president of the museum and historical society.
A few meetings later, the job was theirs.
“We want to see the future of this museum,” he said.
“Quite clearly, a lot of people don’t know that we have a museum and our vision is to inspire people to come and visit, have a look and see what the history of Redcliff is all about.”
The British couple want schools, seniors and people with disability groups to come and visit where they can be educated by the new managers that they are getting.
“We want to meet people with knowledge so we can gain that knowledge as well,” said Alex.
“We’re friendly people. We like to meet and talk to people.”
Once the management was turned over and the walkaround was done, there has been opportunities for change and the hope is to get people into the building to appreciate the shifting around of artifacts.
He said if you look around the museum there is lots of wall space where there could be photographs that can be put up for the history of the museum and putting more indigenous history around the building.
“We don’t think we have enough of the indigenous items in this museum and where did this come from, who was here first,” said Alex.
They have started in the back with photographs and various items. What we’d like to do is if we can get a hold of any indigenous people who might be willing to donate artifacts and share information.”