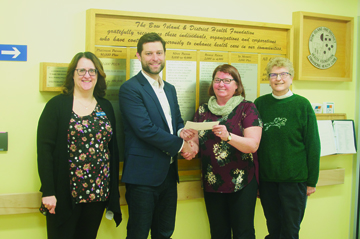 Renewable Energy Systems (RES) donated $5,000 to the Bow Island and District Health Foundation on Feb. 15 at the Bow Island Hospital, ending a three-year installment for a total of $15,000 in donations that began in 2015.
However, RES also announced after they would be renewing their agreement with the foundation for another three years of donations, which will bring the total to $30,000 by 2021.
“It’s continuous support from a company such as Renewable Energy Systems to the hospital and the district in order to help the clients to have a better quality of service and life,” said Mary Lou Hansen, chair of the Bow Island and District Health Foundation.
“It’s extremely important. That’s how the foundation can operate and we can get more help and get better equipment and better need of what the doctors require. It will make this hospital get better service than we do now.”
The partnership began when the health foundation approached RES, when the company came to Alberta in 2015, setting up shop for the 40 Mile Wind Farm Project, to let them know the foundation had their support.
“Wind power projects are so tied to the land and the community,” said Lucas Reindler, project manager.
“We found a lot of support from our local landowners and some of our landowners said that there was this need at the hospital among other things. We’ve supported pool days, local libraries, helicopter rescue. We sort of see that need ongoing in the community and we thought it made sense for us to show our commitment to the community for another three years.”