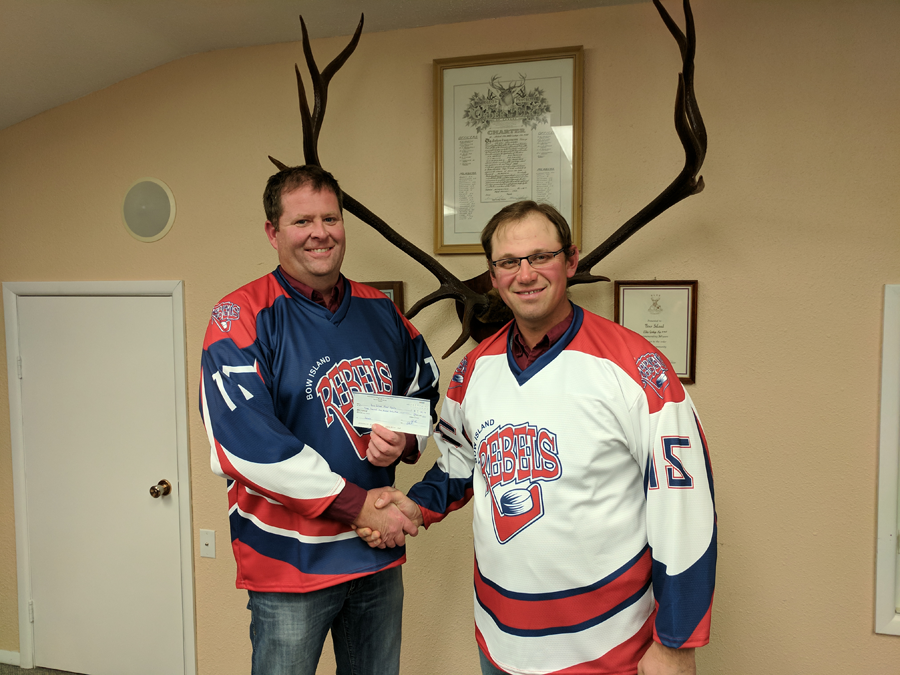 The Bow Island Elks Club donated $30,000 raised from its steak supper auction to five community groups at the Royal Canadian Legion Branch 197 on Feb. 27.
The club gave $5,000 to HALO, $10,000 to the Bow Island Health Foundation, $7,000 to the local food bank, $3,000 to victims services and $5,000 to Meals on Wheels.
They made a separate donation of $3,149.58 the prior week to Bow Island Minor Sports to pay for new home and away jerseys for the Rebels Midget Team.
Shane Lane, the club’s current president, says the Elks’ goal in making these contributions is “to keep our service community alive.
“We’re just trying to give back what the community gives to us.”
Mary-Lou Hansen of the health foundation, which works directly with the Bow Island Health Centre, says their $10,000 will go towards providing 32 new end-tables to put beside the hospital beds.
“The old ones are really run down, so this is wonderful that the people will have all these new end-tables,” said Hansen.
Rob Van Roessel said the food bank’s $7,000 will go towards its general operations.
The food bank prepares weekly food hampers for families in need.
Last year, the food bank gave out 131 packages, Van Roessel said.
“Nobody’s really denied unless it’s been abused, and that doesn’t really happen,” he added.
“Mostly it’s just to help people get on their feet during rough times and it’s been fairly successful that way.”
The $5,000 donated to Meals on Wheels, which delivers food to disabled and elderly people, will go towards keeping their price per meal at $6.
Meals on Wheels’ Maryann Bouw says prices were recently increased to $7, but the Elks Club has stepped in to subsidize the additional $1 per meal.
“The Pleasantview Lodge prepares the meals, and then Bow Island Meals on Wheels pays the Pleasantview Lodge for the meals and we collect $6 for each recipient,” she said.
The donation guarantees that each meal doesn’t cost more than $6 per customer.
Laurie Haynes of victim services, which covers Bow Island and Foremost, said their $3,000 will largely go “to train our advocates that go talk to people in tragic cases … so they know how to deal with victims of crime better.”