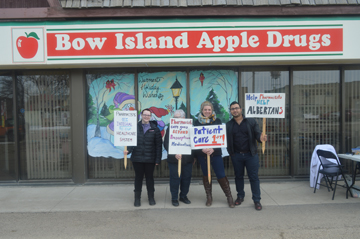 Bow Island’s Apple Drugs closed down from 11 a.m. to 1 p.m. to protest Alberta Health’s cuts to fees it charges the government for extra services, such as prescriptions, vaccinations and smoking cessation therapy.
The protest was done in conjunction with other pharmacies across the province.
“The government has been a bully essentially from the get-go, muzzling our RxA (Alberta Pharmacists Association) by signing a non-disclosure agreement,” said Heber Castillo, one of the store’s pharmacists.
The RxA made 40 recommendations to the government to save costs, which Castillo says were disregarded.
“Basically, (the government) is pooling us with drug costs and we’re not drug costs,” he said. “We’re providing services to the community, like extending prescriptions and initiating therapies.”
Castillo says the RxA “was forced to agree” to the government’s cuts.
“It was either you cut off a finger or you cut off a hand, and if you don’t (agree), we’re going to go with cutting off the hand,” he said.
The RxA isn’t part of the province-wide protests, as they’re prohibited from commenting on the agreement.
“This is from grassroots,” said Castillo. “This is from pharmacists wanting to come back to the table with RxA (and) negotiate with us respectfully.
“We understand there needs to be cost savings. We understand that there needs to be reform, but we want to be part of the solution, not a piñata.”
Under the new agreement, which goes into effect May 17, sets a dispensing fee of $12.15, which is limited to three fees per day per patient.
For medications that don’t require daily dispensing, there’s a limit of two fees per medication per 28 days.
Previously, the dispensing fee was $12.30 with no limits on the number of fees that can be charged.
The fee for injecting a flu vaccine will also decrease to $13 from $20.
The ministry maintains that Alberta pharmacists receive the highest compensation for fees in the country and that the new contract will provide $150 million in savings.
But Castillo says this is due to the relatively higher cost of living in Alberta.
Apple Drugs will continue providing various additional services, even while collecting less fees for the same amount of work, he added.
“We want to provide care for patients,” said Castillo. “That’s our number one thing.
“There’s obvious costs with that. That’s the reality. It doesn’t matter if you go to a physician’s office or a hospital, there’s always costs association with care.
“It needs to be sustainable for us … We’re kind of held hostage.”