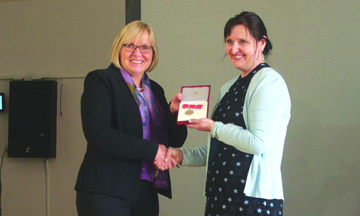 British Consul General Caroline Saunders was at Ralston School to present teacher Sonia Stanton with the prestigious British Empire Medal in front of a full gym of students and parents on March 22.
The medal is awarded to candidates who display meritorious service, which can be done in the community or in a business.
A person is nominated online and the application is sent to Buckingham Palace’s honours team where the criteria is judged.
“I was a little but nervous today,” said Stanton.
“I liked talking in public but not about myself. It was unusual. It means an awful lot that somebody has noticed the work I do and thoughtful enough to write a citation and put that forward to the queen. I do work quite a lot of hours, but I do for the families and it’s really nice they recognize that.”
She said she was “really shocked” when she found out she had been the recipient of the award because it was a matter of her doing a job she really liked.
“That fits for Mrs. Stanton, she’s employed by a U.K. organization, working in this school here,” said Saunders.
“She was nominated by the British Service people here. What she does is two things. One she’s a great teacher, but secondly she has this very important function as the bridge between the Canadian education system and the British education system for the British kids that come here with their parents. That continuity is important to them and when they arrive, that comfort factor is there.”
Lt.-Col. Nick Doyle is the deputy commander with BATUS and was a part of the selection process where they submitted her application more than a year ago and normally a submission for nominations is for a soldier’s outstanding work.“It’s that phrase above and beyond and what’s the golden theme throughout the citation,” said Doyle.
“And for Mrs. Stanton who has worked here now for 11 years, it was the over and beyond bit. And a lot of what Mrs. Stanton delivers here is absolutely fantastic. But we don’t see is all the stuff she does behind the scenes. I know from personal experience as you bring your children into Canada, Mrs. Stanton is already engaged with your previous school, identifying what stage your child is at and what classroom they should go into.”
Stanton will be going to a garden party in June, while encompassing work with a school in Belgium that has a British and Canadian students and look at what is done effectively to bring back to Ralston School.
Those interested in viewing the ceremony can visit https://youtu.be/qJWlSHTvJ-8.