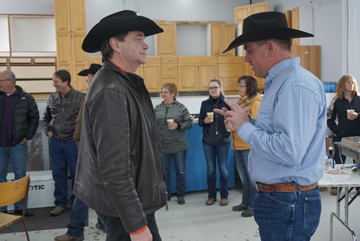 By Jeremy Appel
Commentator/Courier
Alberta Agriculture and Forestry Minister Oneil Carlier was joined by federal Minister of Agriculture Lawrence MacAulay for a March 25 tour of Jenner, the site of the first confirmed outbreak of bovine tuberculosis in September 2016.
The hamlet was under quarantine as a result of the outbreak until February 2018.
The purpose of the visit was “to commemorate what ended up being a successful conclusion to what was a big problem,” said Carlier.
The ministers met with cattle producers in the area to discuss their concerns.
The Canadian Food Inspection Agency worked to ensure Jenner and other affected areas returned to being TB-free.
“That was a huge concern that we retain that status to make sure that our markets aren’t affected,” Carlier said.
“That was the big win in this whole exercise.”
The federal minister highlighted the importance of that industry to the country.
“Our producers raise the best beef and our customers around the world are demanding more of it,” MacAulay said in a news release.
“Lifting all quarantines is a positive step forward for Canada’s cattle industry, demonstrating the value of our collaborative response and ongoing surveillance efforts.”
Carlier intends on visiting Hilda in spring
Although the ministers didn’t make the 137 km trip to Hilda from Jenner to meet with farmers and ranchers who were impacted by the October 2017 wildfires, Carlier said he plans to make a visit in the near future.
“When my scheduled clears up and we have an opportunity to do so, I would really welcome that opportunity to talk to those folks first hand,” he said.
“Maybe it would be a chance, perhaps once the snow melts, so I can actually see what’s happened a little bit better.”
Cypress County Reeve Richard Oster says he’s pleased that Carlier intends on meeting face-to-face with the victims of the Hilda wildfire.
“That’s something he should put on his list to do,” said Oster.
“He had made a comment that he’s talked to municipal people, but he hasn’t talked to the people who were directly affected.”
Oster said that as a municipal official, it’s his duty to relay his constituents’’ concerns to the provincial government, but it would be good for Carlier to see the effects of the fire for himself.
“I think that’s great and he should go ahead and set up something,” Oster said, adding that he relayed the ranchers’ concerns to the minister in Edmonton last week.
Carlier announced on March 5 a $200,000 grant to assist the wildfire victims, which is in addition to a $25,000 per property loan that is interest-free for two years, which Oster said he hopes is expanded.
“It’s a step in the right direction,” said Oster.
“We’ve encouraged the province to look at the idea of increasing the interest-free loans to more like $100,000 and extend it from three to five years.
“In this day and age, you can’t to anything with ($25,000).”
According to the Hilda Fire Recovery Committee, the fire caused an estimated $29,147,147 in uninsured damage.
Finance Minister Joe Ceci said that in addition to the grant and loan, the province is continuously investing in wildfire prevention.
“We put aside hundreds of millions of dollars for wildfire prevention in each budget and that hasn’t changed,” said Ceci.
“As we regrettably see these kind of things happen, the ministers … come forward and they ask to declare an emergency, and then we can flow funding to address that emergency.”