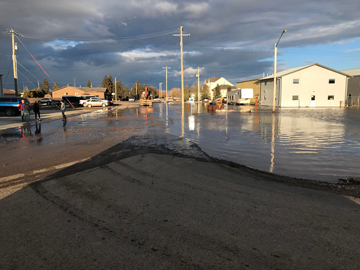 Overland flooding in the County of Forty Mile has moved south, leading to the closure of a section of highway outside Foremost.
The flooding reached Foremost — under a declared state of emergency since Monday after its reservoir flooded — at the Highway 61 and Highway 879 intersection Tuesday evening.
“Our flooding issues seem to be moving from the north to the south,” said director of emergency management Stewart Payne. “We’re not stretched out in the north so much anymore. We’re stretched out in the Highway 61 region passing through our county.
“We anticipate it becoming pretty heavy flooding (Wednesday) evening and then again (Thursday), moving south.”
Payne added that flooding moving from north to south is somewhat unusual in the region.
“Normally, southern Alberta warms up from south to north,” he said.
Foremost Mayor Ken Kultgen said villagers had to act on the spot to minimize the impact of flooding.
“We had some real quick thinking and co-operation from local residents,” he said. “We used some of the local farmers’ clots. A lot of farms have them set up right there. They had some gravel piled right there.
“Kingsway Colony came through Foremost with a load of bails and we flagged them down and asked if we could use his bails to set in on the highway. So we set the bails down and set the gravel down on the road.”
However, the subdivision had been flooded for a while, and water was up to the doors of many shops.
More gravel had to be spread in front of them, while streets were closed to prevent additional water seeping into town.
“We think we’ve got everything set up as good as we can have it for now,” said Kultgen.
“We’ve got it all loaded with gravel right now and stockpiled at that intersection, in case we have to go further to the east. And more bails from Kingsway Colony are sitting by the county shop on the truck.”
As of Wednesday afternoon there had been no evacuation orders, although three households in the county have voluntarily evacuated, with one having already returned home.
“That one happened (Monday). They’re back at their house now,” said Payne. “And then there was two (Tuesday), and there’s potential for one more (Wednesday).”
The Town of Bow Island hasn’t experienced any flooding, nor does administration believe it will be an issue for them.
“The town contracted SMRID (St. Mary’s River Irrigation District) to clean out our Cherry Coulee drainage just before the last melt, and the flow in that drainage has gone down, so we don’t feel we’re going to be at risk for flooding in town,” town manager Anna-Marie Bridge said.
For a complete up-to-date list of roads closed throughout the county, visit https://www.arcgis.com/home/webmap/viewer.html?webmap=66cff94797144fc78a113085ba10e5c2&extent=-112.798,48.5103,-108.7413,50.2499.
— with files from Justin Seward