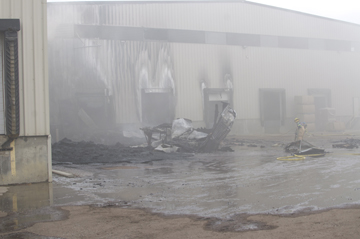 Fire crews were called to Redcliff’s Red Hat Co-operative Ltd., after a structural fire broke out in the northeast corner of the building Saturday morning.
Town of Redcliff’s fire chief Wade Gleisner said once town firefighters arrived on scene with their first engine that there was potential for the fire to get worse in a big hurry.
“I called dispatch and I asked for Cypress County- Box Springs department to be called, shortly after that Medicine Hat deployed to the scene and a little bit after that we brought in Cypress County- Dunmore department,” he said.
Medicine Hat had three trucks on scene, while Cypress County had two different departments there with their apparatus.
“The big concern for us was the wood shop next door,” said Gleisner.
“(If) the fire gets into there, we’re going to be in a whole different situation. We’re trying to contain the outside and the guys did a good job.”
Gleisner could not speculate all the damage done as an investigator was arriving from Edmonton later Saturday night.
However, it looked like most of the damage was to the outside with everything adjacent to the two walls next to the semi trailer unit that was involved in the fire, he said.
As for the interior, some smoke and water damage is the hopeful outcome.
“He and I will go through it with a fine tooth comb and try to discern what the cause was and what the damage is,” he said.
“The owners are bringing in some people to us as well.”
Gleisner heard that there was an employee hurt but could not confirm that at the time, while there were many workers in the building who evacuated when the fire sparked.
Updates will be provided as more details come through the weekend.