Cirque du Soleil puts on magical performance in the Hat 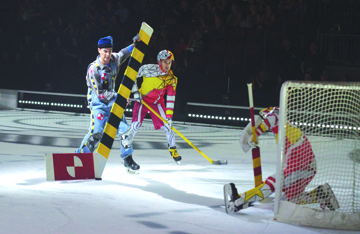 If you didn’t know how acrobatics high above the ice surface or skating tricks worked, you do now if you had attended one of Cirque du Soleil’s ‘Crystal’ performances from May 23-27 at Medicine Hat’s Canalta Centre.
‘Crystal’ is Cirque’s first ice experience show that debut to the public in October 2017 , showcasing world-class ice skaters and acrobats who claim their new ice playground with speed and agility. A whole new meaning was brought to challenging acrobats through the laws of gravity.
Crystal, the main character is one of the 40 artists from 11 different nationalities in the event who goes on her own exhilarating journey, diving into a world of her own imagination on her quest to explore [at a high speed].
“She breaks through the ice and then she falls, so you’re kind of seeing something,” said Julie Desmarais, trained publicist for Cirque du Soleil.
A casting department is in Montreal to find cast members for Cirque du Soleil’s 19 shows, while for the Hat’s show, the focus was on finding more skaters.
“All the skaters in the shows is their first experience with Cirque du Soleil,” she said.
“We’ve launched some open calls, auditions. We go to sports competitions. We have good connections with the federal and local gymnastics team.”
Desmarais had one day off since the cast and crew arrived in the Gas City for the performances but enjoyed her experience in the city.
“On Monday (May 21) I went out and about and it was really nice,” she said.
“Then I took my bike yesterday (May 22) to work and that was exciting. I wasn’t expecting it to be uphill. It’s a nice venue. There’s not a bad seat in the house and from everywhere, you have a good view of the set. The show is made so everyone within this 180 degrees can have a good view of the performance.”
The performances are hosted in venues to a similar size of the Canalta Centre but being from Quebec, shows have been at vastly bigger facilities such as Montreal’s Bell Centre.
With Cirque du Soleil being also in gigantic circus tents, the ice-themed shows “brings something more unique,” she said.
“A lot of the artists had to learn how to skate, a lot of skaters had to learn how to do acrobatics on skates,” she said.
“Our juggler earlier on the ice had to acrobats on skates. You have these artists that have come from the extreme skating and rollerblading and don’t have the experience of an ice show.”
The hockey scene appeared to be a part of the show that got the audience excited.
Robin Johnstone has been a skater for many years and it does not take him a lot to find motivation at this event.
“It’s the audience,” she said. “I know people out there save so much money for these shows, to see a show like Cirque — so it’s something that’s always in your head.
“Every show you play, you know it will be at least one person’s first, so you want to go out there and really do your best and make it worth it for those people who worked hard to see our show.”