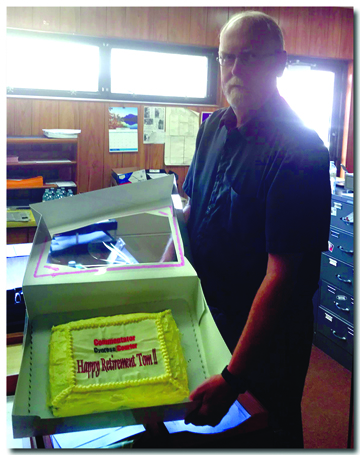 After his second tenure with the 40 Mile County Commentator, longtime sales consultant Tom Conquergood retired on June 8 from an industry he learned a lot about since working an after-school job with the paper in 1974.
“It was just time for a change,” said Conquergood.
He moved away and got his journeymen ticket in Typographical Union, and then returned in 1989 and bought the paper with another partner, before selling the publication 17 years later .
Conquergood managed to stay on with the paper after the sale with going to Taber for a four year stint before accepting the sales consultant position back in Bow Island where it all began.
“It’s a small town community,” said Conquergood.
“We moved back and it was nice to raise our family in a small community. As a saying says ‘It takes a village to raise a child.’
“What the industry taught me is there’s no constant, it’s always changing. It went from hot medal to off-set printing to desktop publishing.”
The staff, people he worked with and his clients he served over the years selling advertising are what he will miss the most.
He will now turn more of his attention to his home inspection business, golfing and chasing his grandchildren.