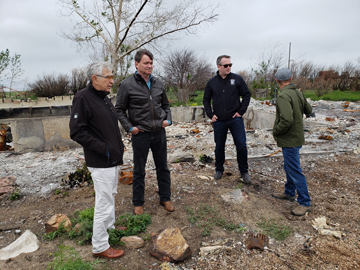 Submitted photo Agriculture and Forestry Minister Oneil Carlier (second from the left) met with producers in Hilda on June 12 to see first-hand the damage caused by the wildfire that swept through the area in mid October, 2017. Left: Medicine Hat NDP MLA Bob Wanner surveys the scene with Carlier, as well as local farmers and ranchers.

By Gillian Slade
Southern Alberta Newspapers
Agriculture Minister Oneil Carlier was compassionate when he saw first-hand in Hilda Tuesday the devastation left by a mid-October fire, but he was not able to offer much help, said Andy Kirschenman, an area producer.
“Their hands are tied in many ways by budgets and everything like that as well.”
Carlier and Kirschenman were able to tour a couple locations where there is excellent recovery as well as some areas that are not recovering at all, plus burned buildings and homesteads, said Kirschenman.
“We’re eight months after the fire so there is some disappointment that it took this long for the minister to come, especially because he was quite close about two months (ago) when he was in Jenner,” said Kirschenman.
Carlier said it was the first opportunity he’d had since the wildfire and that there was no use going to Hilda until the snow had melted.
Conditions at the time of the fire were unusual — extremely dry, with high winds, said Carlier.
“We have done some programs to kind of get them over this tragedy,” said Carlier.
In December, the provincial government made funds available through the Alberta Financial Services Corporation, allowing those affected to apply for up to $25,000 in loans. The loans could be paid back over seven years, with the first two being interest free. At the time, some of those affected felt it was not enough support.
“There is not a lot of hope for future funding,” said Kirschenman. “The hope we have is that policy will be changed so that the next time this happens … that process will be easier.”
If there was a government process in place to assist people financially after the devastation of flood or fire, that would help the recovery process, said Kirschenman.
The disaster recovery program was in place after the 2010 flood in Cypress County. That was before government persuasion resulted in insurance companies making flood insurance available.
The DRP is written specifically for flood devastation and not fires, said Kirschenman.
“Maybe that’s something that should be changed,” he added.
Kirschenman says when there is insurance available at a reasonable cost, that is not really the place for government to be in but there are times and opportunities where some things fall through the cracks.