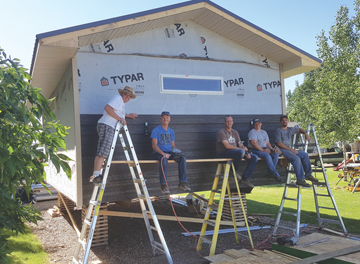 Members of the Bow Island Evangelical Free Church and the Burdett Christian Community Church build a cabin for the Southern Alberta Bible Camp.

The Bow Island Evangelical Free Church in a joint effort with the Burdett Christian Community Church are building a cabin for the Southern Alberta Bible Camp (SABC), which has been held in the Lomond area since 1981.
The cabin project was taken on by the church groups, because the camp needed more accommodation after having to turn away kids due to the limited capacity last year.
“Last year the camp saw 1,720 campers and had to turn many kids away,” said George Mills, pastor of the Bow Island Evangelical Free Church and volunteer on the project.
“(It) was because of this, the camp is seeking to expand its capacity by about 450 to around 2,200 campers per year. In order to accomplish this capacity increase, six cabins need to be build. Four are currently being built and moved to the camp.”
Construction of the 16’ x 24’ fully insulated Bow Island/Burdett cabin began four weeks ago at the Mills residence and will sleep up to 10 people.
“This project has brought many community members together as well as the camp and churches for a great goal,” said Mills.
Both churches involved in the cabin building held community fundraisers and saw locals in each area come together and raise a considerable amount of money for the project.
A surplus in funds from the cabin that is being built in Okotoks also went towards the Bow Island/Burdett project.
If groups wish to build a cabin, they need to raise $29,000 and find a location to build it.
The cabin will be moved to the camp later this summer and will be in full use by 2019.