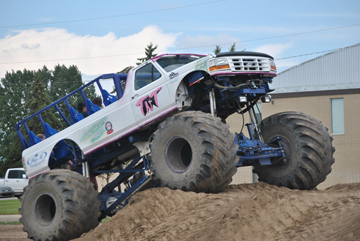 Kids had the opportunity to ride in a TNT Monster Truck.

A little rain didn’t get in the way of people from the region enjoying Redcliff Days over the weekend.
The three-day festival included activities for all ages, including performers, vendors, a show-and-shine, monster truck rides, library fundraisers, a block party outside Who’s on First and fireworks at Lions Park to cap off Saturday’s festivities.
Brandin Erikson made the trek from Seven Persons to take part in the festivities.
“We’ve gone every year,” said 27-year-old, who is originally from Medicine Hat.
She said her favourite part of the weekend is the show-and-shine, put on by the Redcliff Lions Club at Lions Park.
“Cars are always exciting to see,” Erikson said.
Alastair Lowry of the Lions Club says this is the 24th year the group has put on a car show as part of Redcliff Days.
“Even after the rain, we still had a pretty good turnout,” he said Saturday afternoon.
“We try to continue doing this event for the people who love to see the cars and actually show off the cars.”
The club also holds a 50-50 draw each year, with door prizes donated by businesses in the Medicine Hat-Redcliff area.
“We’re trying to get more noticeable, since we’re (one of the) last community service here in Redcliff, so we’re trying to make ourselves known to the public,” said Lowry.
“This is one good way to let the people know that we are here and we’re here to help.”
Meanwhile, the Knights of Columbus sold chili outside of the public library, while a book sale took place inside. Both were fundraisers for the library.
Town Coun. Jim Steinke, who’s also the grand knight for the local chapter of the Knights, said Redcliff Days are “very important” for bringing former and current residents of the town together.
“As you can see, pretty much all of the people from Redcliff are out enjoying themselves and visiting, which a lot of times doesn’t really happen unless there’s a type of function,” said Steinke.
“It’s good for the business financially, so it works out very well.”