Shovels officially in the ground for Eagle Butte project 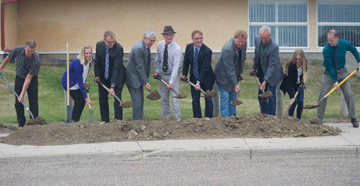 After three years and a septic setback, the Eagle Butte High School Modernization and Addition project held a groundbreaking ceremony on June 18.
“It’s exciting,” said Eagle Butte principal Mark Heinricks.
“The ceremonial pomp is wonderful. But when we started to see the crews and fences come, we knew it was real and that’s what got the energy going for sure.”
Heinricks said the school used a “learning as we go” approach through the process. For many of the staff members, it was their first time going through a project of this magnitude.
The process included meeting twice a month for detailing what the architects had for their design.
“It’s overdue in the sense we’ve been waiting for it,” said Heinricks.
“There’s other schools out there that are older than our school. But we definitely had some areas that needed to be looked after. The division did a great job of trying to help us through that process, whether it was mechanical kinds of issues or outdoors, windows kinds of things.”
After initially getting the green light for the project back in 2015 from Alberta Education, the process had a setback with the septic system replacement, which pertained to water flow. It was then determined that the 20-year-old tank had to be replaced, which will be a separate priority in the future.
Students can expect in a couple years time when they come to school something “completely different and some of that is the way it was originally built. Being in the ground, it’s not conducive to what we need in the building itself,” said Heinricks.
“The whole front area is going to be opened up and have bottle necks on both ends. There will be a reconfiguration of classrooms.”
The changes on the exterior will be the installation of a new roof, which will include solar panels that will allow the school to become more energy efficient, and provide more learning opportunities.
Interior renovations will include to the GTS shop, science lab, library, common areas, cosmetology lab, special education rooms, drama and art rooms, while there will be two retractable walls for classroom spaces.
The $5.9-million project is slated for completion in July 2019.