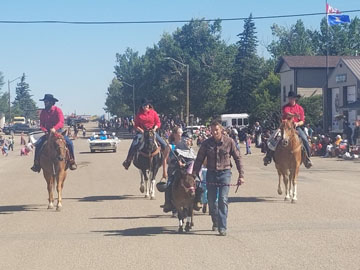 By Jeremy Appel
Commentator/Courier
Floats, cars, tractors and trucks filled the streets of Burdett on June 30 to celebrate the hamlet’s 105th anniversary.
Every five years Burdett has special festivities, such as a parade during the day and fireworks at night, to mark its birthday.
In other years, there are still celebrations, but not as large.
County of Forty Mile Coun. Chantel Timmons, who represents Burdett, says Burdett Days have been part of her summer since she can recall.
“It’s sort of second nature to be here,” she said of the festivities.
Timmons co-chaired the 100th Burdett Days in 2013, but decided to step up and chair this year’s event.
“I like to think that when you do something like this on the large scale that we do it every five years, that it keeps the community alive,” she said.
Many people who’ve moved away from Burdett come back to town for the celebration.
“We are all friends in this community,” said Mabel Neil, who currently resides in Bow Island, but considers Burdett home.
“People who come in amalgamate and become part (of the town), so we’re a rural family.”
Another Bow Islander, Crystal Klassen, was in Burdett to see two of her sons — Clay and Garrett — participate in the parade as part of the North Forty Mile 4H Club.
“It’s a fun family event for young and old alike,” said Klassen, who originally hails from Saskatchewan.
“Some have roots here and some are just looking for something fun to do on the weekend.”