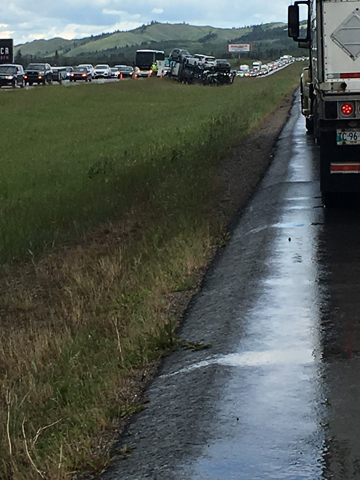 Photo submitted Traffic was backed up for hours on the Trans-Canada Highway just west of Calgary due to a vehicle collision on July 2 that caused the death of a man from Redcliff.

A 61-year-old man from Redcliff is dead following a collision Monday on the Trans-Canada Highway near Cochrane, just west of Calgary.
Police report that the fatal collision occurred when at approximately 12: 30 p.m., a sedan travelling eastbound was struck by an east-bound semi at the Morley Road and Bear Hills overpass.
The adult male driver and lone occupant of the sedan, identified by police as a man from Redcliff, died from injuries sustained in the crash.
The driver of the semi was not injured.
Two other vehicles including a sedan and a truck pulling a trailer were involved and sustained damage. No other occupants were injured.
Weather at the time of the collision was reported as heavy rain with hail in the area.
Cochrane RCMP Cpl. Troy Savinkoff said that while the collision remains under investigation by an analyst, it’s reasonable to say weather conditions played a role in the accident.
“It would be pretty safe to say that that was a contributing factor to it,” he said.
“But to say what dynamics other than that (were at play), I can’t comment on that until we hear back from the analyst.”

–With files from Peggy Revell