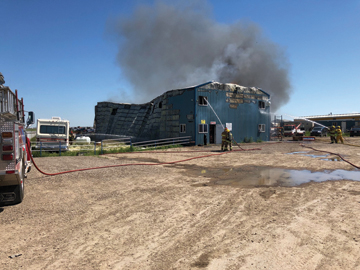 A blaze tore through Cypress County’s Jayman Metals from 11:30 a.m. to 2 p.m. on July 13, with the remains of the building needing to be torn down by an excavator once the fire was brought under control.
The county’s fire department enlisted support from Dunmore and Box Springs stations, as well as a water tender from the City of Medicine Hat, through its Emergency Operating Centre to provide logistical support to the crews on scene.
County deputy fire chief John McBain says that a fire of this magnitude is not out of the ordinary this time of year in the rural Prairies, with its dry heat and remote communities.
“The biggest problem is getting water,” he said.
Usually by the time the county gets to the fire, it’s fully involved, which was the case Friday, said McBain.
The fire apparently started with some workers draining a vehicle’s fuel tank, he added.
It’s difficult to determine the precise cause of the fire, as “any little spark” could have started it.
“It was a hot day, and our Cypress County, as well as city, fire guys did a good job,” said McBain.
“Everybody stayed safe. We’re trying to keep everyone hydrated and send them home healthy.”