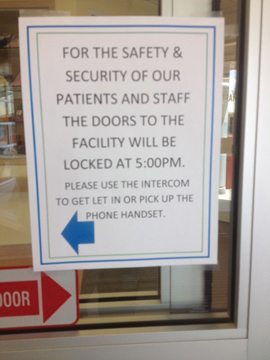 SUBMITTED PHOTOS The doors into the Bow Island Health Centre are now locked after 5 p.m. To gain entry an intercom is used.

The doors into the Bow Island Health Centre are now locked after 5 p.m., and the reason for this is security, says Alberta Health Services.
Recently signs have gone up at the hospital entrance with a request to call for someone in order to gain access.
AHS says this move is about enhancing security at the facility.
The mayor was not notified of the plans.
“I did not realize they were going to lock the doors,” said Gordon Reynolds mayor. “If that has impeded anybody’s access to the hospital that’s a concern. If it is impeding access then we need to follow-up and do something about that.”
A few local residents have called Reynolds directly expressing concerns about the doors being locked at 5 p.m. and the town’s office has heard from more residents, said Reynolds. The callers have been told to contact AHS directly.
Reynolds was previously made aware that hospital staff were concerned about easy access into the building at night when there are very few staff on duty.
“If the staff are seeing this as a problem and requested that this be done then … After 5 o’clock there’s not a lot of staff in the hospital and they have had concerns under OH&S (Occupational Health and Safety), working alone and that sort of thing,” said Reynolds.
The recent arrangement allows staff to focus on patients, says AHS.
“This also allows our staff to focus on providing care to patients, rather than constantly monitoring the front desk,” said Gwen Wirth spokesperson for AHS.
AHS is working toward improving security at the facility by adding new doors to secure the emergency department from public areas and this is expected to be completed by December this year, said Wirth.
“Once these upgrades have been made, AHS will reevaluate the time it locks its doors,” she said.
Consideration was given to having a security guard at the entrance rather than just locking the door, said the AHS spokesperson.
“After consultation with Protective Services, staff and leadership, the decision was made to add new doors to secure the emergency department from public areas,” said Wirth.