Blues at the Bow to have a Street Party 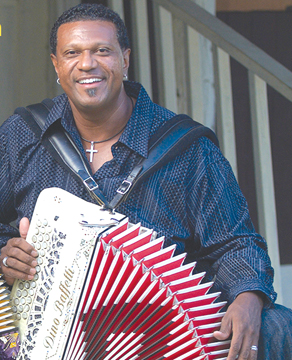 Chubby Carrier will be the main act at the Blues at the Bow Street Party on Aug. 24.

It’s been 25 years since local music lover Stuart Couillard’s idea to turn the historic Bow Theatre in Bow Island into a blues club became reality, but it’s unlikely he foresaw the icon his dream would become.
“He would have tremendous pride in its longevity,” says Blues at the Bow board member Wayne Judkins, as the club approaches its quarter-century anniversary. “He liked music, and he liked the blues. You never despise small beginnings, because he started small and it has really turned into an excellent venue.
“We ‘re going to be recognizing him Aug. 25 as the founder and the gentleman with the vision — he’s the one who started this.”
Couillard unfortunately passed away in 2010 but his legacy lives on through a small-town club known to feature some big-name talent. And with Blues at the Bow gearing up for its big birthday bash, it just wouldn’t be right without some world-class entertainment from an internationally recognized artist.
The party is set for Aug. 24, and is ready to welcome Grammy award-winning Chubby Carrier and The Bayou Swamp Band. The Louisiana-based Carrier is ultra famous for a musical styling of his native state called Zydeco, which combines blues, rhythm and blues and the native sounds of his home.
The show starts at 8 p.m., with tickets available online at bluesatthebow.com. But the fun begins well beforehand, as the street in front of the 102-year-old building will be blocked off for a 5:30 p.m. barbecue and beer gardens.
Tickets for the Skinny’s Smokehouse-provided dinner and beer gardens are also available online, and are sold separately to the 8 p.m. show inside. The website also links to a Prairie Sprinter deal for Medicine Hatters looking to take in the event without worrying about the half-hour drive each way.
Judkins has been on the board for the past years, but knows the club’s history well. The website features a tribute piece written for Couillard listing all he took care of to keep the doors open — and that list is pretty long — but that intense commitment wouldn’t have resulted in much without strong community support.
“I think it’s very important to thank the people who have supported that club for the past 25 years,” Judkins says. “The people of southern Alberta — we would just like to give them a big shout-out and a big thanks. We get support from Calgary, Lethbridge, Medicine Hat, all over, so it’s a very successful (venue).
“(Blues at the Bow) puts Bow Island on the map.”