Lots of potential in Bow Island after environmental scan 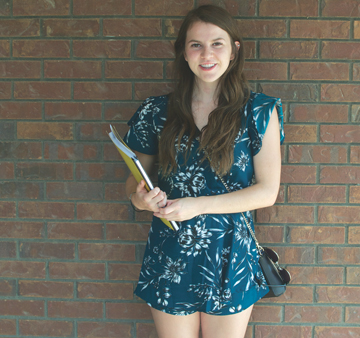 After three-months of doing surveys, talking to businesses and the mayor, soon to be second-year Medicine Hat College business student, Kamryn Wiest, compiled a thorough, detailed environmental scan and presented her report to Bow Island town council on Aug. 13.
She conducted in conjunction with Economic Development Alliance of Southeast Alberta’s executive director Theresa Hardiker an environmental scan for the Town of Bow Island from May to August, focusing on the tourism, recreation and business prospects in the community and built a plan for further growth.
“Bow Island is actually a real diverse community and they do have potential to open up,” said Wiest.
She said “a bunch of opportunities” arose from the scan including retail, which Bow Island residents would support as well as town council.
“It’s very apparent to me the Town of Bow Island is very good with working with entrepreneurs and anyone who wants to open a business in Bow Island and they meet with you regularly and are very quick at processing your ideas and helping to develop it,” she said.
“They really want to grow their business community. So they’re all about working alongside community members, entrepreneurs or business owners to help bring their ideas to life.”
Food was also observed with the increased possibilities of more restaurants and cafes, while other areas included exploring the marketing strategies for the town and reaching out to communities nearby including Cypress County and the County of Forty Mile and seeing that option as a strength and not a threat, she added.
“It was kind of a cool experience because everyone is very welcoming and friendly,” said Wiest.
“They recognize you as being an outsider in the community. They’re so used to seeing the regulars shop and they see you and it’s like ‘oh what can I do, what do you need, what brings you to Bow Island.’ Everyone was very welcoming in terms of filling out my surveys.”
Bigger businesses such as the Viterra Bean Plant and the home building businesses were tougher to get into because you couldn’t just walk-in and you needed connections, she added.
Recreational findings included offering new facilities to residents who take a different interest in other activities that the town already has. Upgrading facilities or monopolizing what Bow Island already has in park updates was also mentioned in the report.
The tourism section was based on visitors filling our surveys, which suggested the town join facilities in terms of expansion to the visitors centre, coupon books for advertisement and promoting nearby attractions.
Curbside appeal (wall murals and paintings), website and print upgrades and social media use were ways of upgrading the marketing area.
She has done a similar project in her marketing class.
“This year I had done almost a 200 page project for my marketing class and we developed a marketing plan for local a business plan for Medicine Hat,” she said.
“I really took that experience with SWOT analysis and interviews, and creating recommendations into my opportunities in Bow Island. It gave me a real good outline of what was expected and how to perform these things.”
Bow Island Mayor Gordon Reynolds was enthused with the presentation as there was lots of information to work from and now it’s a matter of “digesting” it.
“It’s a lengthy document,” he said.
“I was surprised at (what) Kamryn came up with. It’s going to take a little bit of digesting. There’s good information there. Our intention will be to share with our rec. advisory committee and our tourism committee.
“And on the business side of it, share results with the chamber and ultimately with the public. It was a well done document and looking forward to some of those opportunities.”
Council passed the motion to update the website after the meeting.