Sheepdog Nationals come to a close 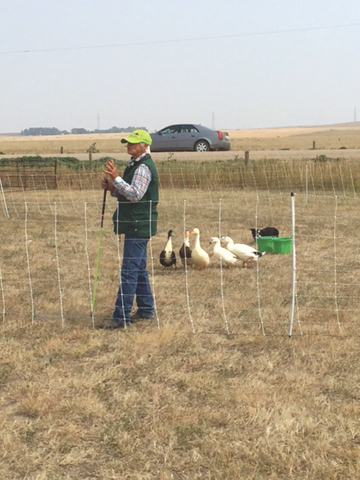 Jill Brodie with the ducks at last year's event.

It was a weekend filled with patience, skill and most importantly teamwork during the final two days of the Canadian Sheepdog Championships in Dunmore.
The event was held over four days and had narrowed the field down to the final 12 contestants by Sunday morning.
Each competitor had to work with their dog to herd two separate groups of sheep into one group, then separate them back into two groups – all while working inside a set playing field. Handlers had to work with their dogs from great distances and communicate through words and whistles to make sure their dog was on the same page as they were.
“It’s been great so far,” said organizer Chris Jube. “This is one of the biggest events we’ve had in western Canada with these dogs – it’s actually bigger than what we were expecting but we’ve worked hard and it’s been a great few days.”
Things wrapped up Sunday around 4 p.m. and a champion was crowned. Results were not submitted by press time.
“We have people from all over Canada competing,” said Jube. “We have a world champion here and four Canadian champions.
“We had a good amount of people coming out to watch each day and it’s great to see. It’s years and years of training that go into competing in an event like this.”