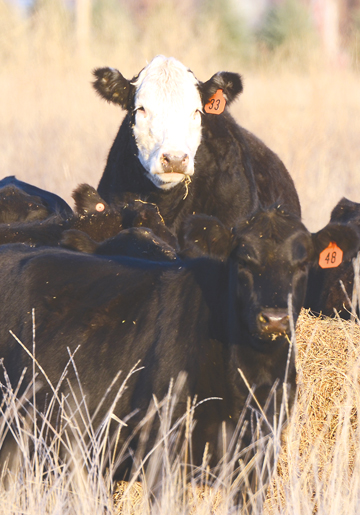 The agricultural industry has taken a hit with the drought this year and it is no different with livestock producers as they are feeling the heat with the increase in feed prices.
Livestock producers will be looking at paying $250 per tonne for feed which is up over $100 from last year because of the lack of moisture to produce hay bails.
Medicine Hat Feeding Company general manager Lyle Taylor said it’s a scenario where a livestock producer may need 1000 bails of hay to feed the cows during the winter months and there is 300 bails available, then it becomes a matter of going out and buying it but if there is the same harvest next door then there is nothing to sell.
“It’s a big domino effect,” said Taylor.
“You have to pay more for it and it reaches a point where you pay $250 a tonne per feed to feed your cows, you may as well sell them. We are going to restrict the size of their cattle herd,” said Taylor.
Most of the cattle that will be sold off with be those animals that have had a bad year on the milking bag, where a sell off will begin in the fall and will be replaced until a producer can see what the following year offers, he said.
A rejuvenation in a herd is normal at a 10 per cent sell off, but if it is creeping up over that mark into the 20 percentile, that is when incomes are squeezed harder and putting a restriction on the cattle.
Taylor said “it’s a vicious spiral.”
He added you would have to go back at least 30 years in the record books to see a significant drought in these parts.
“Agriculture people are very tough people because of the way the market goes up and down,” he said.
“They’ll do what it takes to survive.”
A fall rain and some snow accumulation will help producers to have a better outcome in 2019.
“It’s horrendous,” said Tim Piotrowski, a Manyberries rancher.
“Between last year not being overly wet and the winter and spring that we had, this is probably going to be the deciding factor for a lot producers that were on the bubble whether or not they’re going to be in the business or not. And with feed prices, the way they are, a lot are not going to be able to afford to stay in the business.”
He has been effected with the feed prices by having to cut back cattle numbers, supplementing grazing with feeding, where the herd will be fed earlier than normal.
Since last fall, he has cut back 20 per cent of this cattle and plans to cut another 10 per cent this year.
“Right now at least we’ve got water,but when your out of water then there’s a problem,” he said.
“We’re going to get by this year but next spring is really going to tell the tale.”