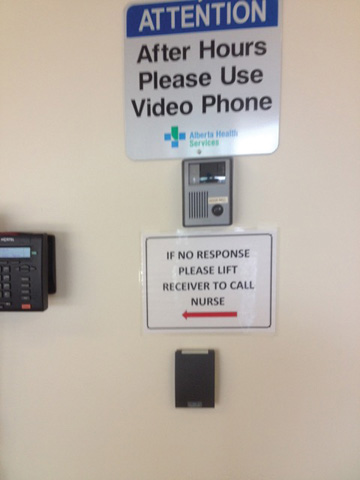 Some positive changes are being made at Bow Island Health Centre regarding locking the entrance doors after 5 p.m.
Recently a member of staff has been sitting at the front desk after 5 p.m. to open the locked doors without people having to ring a buzzer and wait for someone to come to the door to let them in, said Sylvia Strom, Bow Island resident.
The hospital doors are now also unlocked until later in the evening.
“The hospital doors have been open again, until 8:30 p.m.,” said Marjorie Moncrieff of Bow Island.
The decision to lock the doors after 5 p.m. was revealed in the News in early August and was raised at a recent Palliser Triangle Health Advisory Council (PTHAC) meeting. Someone had arrived at the hospital with a loved one in an emergency and they could not open the door to enter.
Moncrieff raised the issue again of there being no public consultation before the change was made. She pointed out that consultation in a city may not be warranted but in a small community it is.
Alberta Health Services (AHS) declined to provide a statement on Friday about the positive changes recently made regarding the locked doors.
AHS did say there is more positive news coming about Bow Island within weeks.
In the interim additional internal security doors are being installed to enhance security within the emergency department.
The cost of those doors, updating sprinklers and relocating cameras is approximately $75,000, an AHS spokesperson said recently.