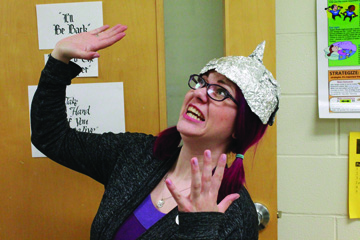 UBMITTED PHOTO Shyloh-Dawn Bonogofski, a psychology teacher at Dunmore's Eagle Butte High School, wears a tin foil to protect herself from the coming alien invasion, or so she tells her students to teach them critical thinking.

Shyloh-Dawn Bonogofski wears a tin foil hat, but she’s not a conspiracy theorist. The Grade 10, 11 and 12 psychology teacher at Eagle Butte High School in Dunmore uses her tin foil hat to teach students not to believe everything they hear. Students naturally ask about her hat – which she usually dons for a few days the week before Halloween – and she tells them it’s to fend off a coming alien invasion. “I suggest to them that they too should probably get on with making their own hat if they want to protect their brain from aliens reading their thoughts,” said Bonogofski. After three days, she shows her students a hoax website about the impending alien invasion, which she uses a springboard to begin a discussion of how you cannot believe everything you read online. “I really commit to it for the four days,” she said, adding that she tells them about the supposed alien invasion with a fully straight face.
“We get into looking at what’s valid information, how can we trust the information we’re getting and critical thinking.” Bonogofski uses the hat to get kids engaged in the concepts she’s teaching by standing out. She had to stop using it for a few years after word got out about the real reason Bonogofski wore the hat. This isn’t the only unconventional method Bonogofski uses to engage her students with psychological concepts. This past week, she had her students make their own Rorschach test. The kids went around and said what they saw in each inkblot. Bonogofski also performs for the students as a means of teaching them about Freud’s three parts of the self – id, ego and superego.
She tells the students she has a guest speaker and then goes out into the hallway, returning dressed as the devil, representing the id, while the song “Shout at the Devil” by Motley Crue plays over a Bluetooth speaker. Just as the id can be symbolized by the devil, the superego is an angel. She goes back into the hall and returns dressed as an angel to the sound of Jimi Hendrix’s “Angel.” Bonogofski says the kids love it.
“The more unique you can make it, the more it will stick out to the kids,” she said. “I try and do hands-on activities and experiments, and share lots of personal stories.”