Highway 515 is one rocky road 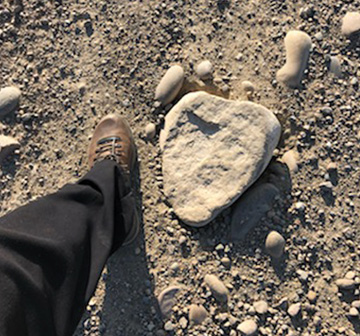 If you have driven down Highway 515 east in Cypress County recently, you will notice the road has deteriorated to the point of big rocks popping out of the gravel and becoming a safety hazard.
Dan Hofer lives 10 Kilometres east on the highway, and said the road issues has been going on for 10 years and i is getting to the point where its not safe to drive on.
He added that for a 20- Kilometer stretch, drivers can see anything from pot holes, to large rocks coming out of the ground, which are getting worse every year with the frost.
“The road can’t be patched up. It has to be rebuilt from the bottom up,” said Hofer.
“It’s in such a state of repair that you wreck your equipment going down that road. If you go down there with a half-ton pick up truck, guaranteed it’s getting some damage to it because of the rocks on the road.”
It was more recently that a truck was passing a tractor on the highway and threw a rock the size of baseball into the windshield, he said.
Even EMS has had a delayed travel time to calls.
“We ourselves (Elkwater Colony) have four members on the Elkwater Fire Department and a lot of time they’re called out to an accident scene or a first response situation and they can’t get there in quick enough time because of the road condition,” he said.
“You actually wonder sometimes if they’re going to make it to the scene themselves and not have an accident.” Alberta Transportation owns the road and had told Hofer that they would have to get someone to come and look at it in order for a grader to get the go ahead to run over the road.
“It’s just too long of a wait,” he said.
“The longer the wait, the worse the road gets.”
Volker Stevin is the contractor for graveling the road and was last seen out there about a month ago but now the gravel is non-existent.
Hofer met with county council earlier this month to see if councillors would meet with Alberta Transportation on the issue.
Council said they would be meeting with them in November.