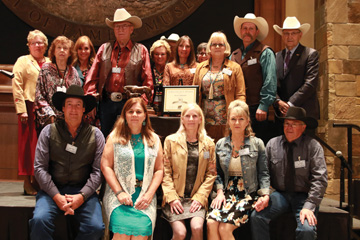 Cypress County’s Herb Krause and wife Minnie have been American Quarter Horse Breeders for over 50 years and for their hard work they were awarded one of 17 50- year breeders award at the American Quarter Horse Association Museum in Amarillo, Tex. back on Oct. 22.
Krause took home the legacy breeder award and said they never expected to get as far they did and the years went by fairly quick.
“It’s quite the honour for us,” said Krause.
The award is given out annually to a 50-year breeder who as not missed a year of producing at least one foal.
The whole atmosphere surrounding the banquet was enjoyable in the Lone Star State (Texas).
“It was quite something. They treated us royally,” said Krause.
“It was an experience. I thought it would be more high class, but they were right down to earth. We got to tour the museum, which was interesting because it showed you all the horses that start this thing 78 years ago.”
Krause grew up watching his father, Alfred, breed the thoroughbred horses in Hilda area before getting into purchasing meirs and they worked their way into registering with the AQHR after Minnie and him were married for 10 years.
His first two quarter horses were bought in Denver back and were used as race horses for 15 years before their four daughters grew up and barrel racing became the popular sport in the family.
“We started to get the better and better horses,” he said.
“We had the four girls and the thing was to keep them busy when there was no one up.”
The family ranch off of Highway 41 north has three meirs, a two-year-old Sting a Fling Horse, which is ranked third in the world in siren barrel horses and a couple of colts.
Four hundred and thirty-two colts have been bred on the ranch and have been registered with the AQHA.
“Fifty Year Breeders are the backbone of the American Quarter Horse Industry,” said AQHA executive vice president Craig Huffhines in a press release.
“They have dedicated so much of their lives to the American Quarter Horse, and they make the vision of our founders a reality through their knowledge and dedication.”