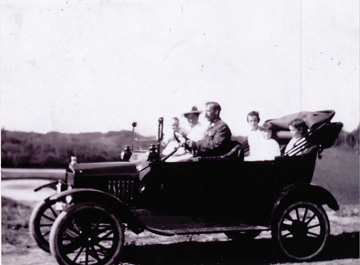 Frank Pond at the wheel of the Ford Model T Touring car.

2018 marks the end of the 100th anniversary of the First World War. I felt I should write with that in mind. In 2014, a lot effort was put into commemorating the start of the First World War. The Medicine Hat museum put together an exhibit. This exhibit had its ribbon cutting on Aug. 4, 2014 and ran until April 12, 2015.
Over the years, I wrote several articles on World Wars one and two, my family’s involvement and war brides. I used several photographs in those articles that came from my family’s collection.
My great grandfather, Frank Pond, was the only family member to my knowledge that was in the First World War. He died Chirstmas Day 1923 from mustard gas poisoning. He served with the 50th Batallion and the Canadian Expeditionary Force.
Several years ago, I inherited the family photograph collection on my mom’s side. With that there were a lot First and Second World War photographs.
I thought I’d share a few of these 100 plus year old photos.
The ones selected I felt were good examples and helped tell the First World War Story. The photos were all taken in Canada. One of the most unique photos shows three men side-by-side. My great grandfather, Frank is on the right side. The other two are unknown. To me, the man in the middle, I’m told was the tallest man in the Canadian army. The next photo, two men in full uniform with their rifles and bayonettes, note their living arrangements in the background, tee pees. One great photo shows my great grandfather behind the wheel of a model T Ford Touring car. The other with him would be relatives. This particular car looks to be a new 1917 Model T, a luxury at that time. There were several groupings of soldiers in the photos from the 50th Batallion. I can always pick out my great grandfather due to his large mustache. The final photo shows the field of honour in Calgary where my great grandfather was buried. I only have one picture of his funeral, one of his temporary cross, one of his head stone and only two of his wedding and dozens to do with the first world war. “We will remember them.”