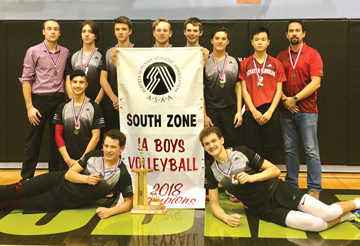 Winning never gets old. In the case of the Senator Gershaw School Gators senior boys volleyball team, it has seems to be a trend the last three seasons, as the team brought home a third consecutive South Zone 1A banner over the weekend in Lethbridge.
The varsity volleyball squad went undefeated and finished first in the pool by defeating Picture Butte in two sets (25-15, 25-9) as well as the Brant Christian Eagles in straight sets (25-14, 25-12) in round robin play. That would earn the boys a buy into the semi-final where the Gators swept Nobleford before defeating Brant Chrisitian once again in the final in two sets.
The boys leave Wednesday for provincials at Bashaw.