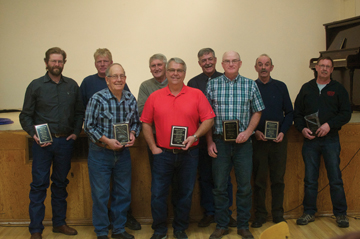 Between 150 to 200 people gathered at the Burdett Community Hall to celebrate what was another successful sugar beet harvest at the Bow Island/Burdett Sugar Beet Growers annual banquet on Dec. 6.
“That’s the main reason we’re here tonight, just to get together, celebrate that the harvest is over and have the opportunity spend time with our neighbours and see who’s the top grower,” said local sugar beet growers’ president Bernie Lyczewski.
“Somebody has the bragging rights for another year is the thing. We all kind of learn something from our neighbours that a little thing they might do differently then the rest of us.”
Despite the wet weather to begin harvest in early October, producers were still able to accumulate a total of 170,126 tonnes per 30.40 acres of sugar beets this year.
“We didn’t really get started until the 15th,” he said.
“In 10 days, the harvest went really well once the conditions improved.”
Derrick Lynn of DJ Lynn Farms led the 2018 top 10 growers list with 37.86 adjusted tonnes per acre but was unavailable for comment due to vacation.
2. Bert Kolen Farms- 37.39
3. Jan and Anne Marie Jonker- 36.36
4.Wikkerink Farms- 36.18
5. GC Grol Farms- 36.00
6.North Island Farms-35.87
7. Quattro Ventures-34.25
8. Dalarose Farms 33.95
9.Bernie Lyczewski-33.90
10. Josh Klassen- 33.11
Klassen was honoured to get into the top 10 of an area of experienced growers.
“It’s a tough challenge,” said Klassen.
“We got a few acres out at the beginning of the month. Conditions just deteriorated. Right through the first half of October we were slow harvesting and a lot of sitting on the sidelines, waiting for conditions to improve.
“It wasn’t until after the 15th and the 15th to the 20th we really got rolling. We got the three weeks that we really needed to finish up there and things really improved later on.
His 33.11 adjusted tonnes per acre were better than he anticipated this year considering the crop planting ahead of a moisture period at the end of April never materialized and left a poor stands at start of the season.
“With the heat we had this year, the crop really still came through and it’s probably the second best crop we’ve had,” he said.
Kelly Van Ham, director for the Bow Island and Burdett Sugar Beet Growers and owner K4J Farms, took home a 30/20 award for collecting 20 per cent sugar over 30 plus tonnes per acre.
“It’s very nice to the farm,” said Van Ham.
“We’ve got some excellent sugar beet varieties. For us to grow in access of 30 tonnes and have in access of 20 per cent sugar. A lot of my neighbours did the same. It’s just wonderful. It’s the highest quality crop we’ve ever grown.”
The weather cooperated this year for him to have that crop, he added.
Other 30/20 award winners included Wikkerink Farms, Quattro Farms, Jonker Farms, DJ Lynn Farms and Muller Ventures.
The 20/20 awards went to Varekamp Farms, A&B Acress and Henk Grol.
A total of 848, 525 tonnes across an average of 298 yields came in throughout southern Alberta in 2018.