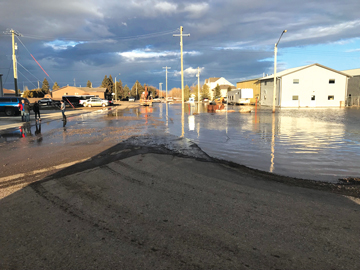 AUGUST
An unfortunate tragedy struck Bow Island, when an 11-year-old boy (Kale Porteous) was struck by a pay loader and pronounced dead at the hospital on Aug. 14.
A scholarship fund was set up in memory of an 11-year-old Bow Islander who died in a farming accident on Aug. 14. In lieu of flowers, the family established the Kale Porteous Citizenship Scholarship Fund.”
Bow Island and area residence got a first hand look at HALO 2 (BK-117 B2) in Centennial Park on Aug. 15. The total flight time from Medicine Hat was 12 minutes.
“It does two things fantastically,” said chief pilot Steve Harmer to the Commentator.
“One it hoists well and second it’s good for EMS. If you look in the back, you can see it’s a very flat floor. It’s not a sitting bucket like most are. We carry a real stretcher right out of an ambulance. We don’t carry a sled like the other helicopter.”
“She cruises at a 135 knots, which is 270 km an hour roughly.”
The Susan Andersen Library in Bow Island experienced a very busy summer, seeing dozens of kids spending their days involved in the various fun and games.
“Summer is usually pretty busy for us at the library, because we run kids programming from early July to mid August,” says library manager Kathryn Van Dorp. “We have anywhere from 30, 40, 50 kids on any given day.”
Kids programming began July 3 this year, running through to Aug. 17. Roughly 80 local children between the ages of 6 and 13 registered. The library decided to introduce an age split this year (6-9 and 10-13) to offer better fits for each child, with activities from crafts and movie matinees, to outdoor activities, scavenger hunts and trivia.
The Blues at the Bow held a Street Party as a part of their 25th anniversary celebrations on Aug. 24. A barbeque and beer gardens was set up outside prior guest listening Grammy award-winning Chubby Carrier and The Bayou Swamp Band.

September
Livestock producers felt the hit after it was announced that feed prices increased to $250 per tonne, which is up $100 over the previous year. The increase was due to the lack of moisture to grow hay bails.
Prodcucers were forced to sell of their herds who have had a bad year on the milking bag.
Medicine Hat Feeding Company general manager said you would have to go back 30 years to in the record books to see a significant drought in these parts.
Local 4-H member Dawson Pahl received a 4-H Canada Scholarship from John Deere Canada for his community services, being and effective 4-H member and writing an essay on why they need the money.
The Whitla wind project broke ground just south of Bow Island on Sept. 10. The $325 million Capitol Power based project 56-wind turbine project started with the access roads, while the operations and maintenance building will be built starting in the spring of 2019.
Bow Island hired new CAO Dave Matz, taking over from long-time town manager Anna-Marie Bridge, who was retiring at the end of the year.
Matz came to the town from the County of Forty Mile, where he was Agriculture fieldman for 18 years.

Alberta Health Services decided to have the doors locked at the Bow Island Health Centre at 5 p.m., which ruffled some feathers at the Palliser Triangle Health Advisory Council meeting on Oct. 1.
A situation was metnioned regarding some one arriving at the hospital with loved ones in an emergecny and they could not open the door to enter.
Bow Island resident Sylivia Strom said the only way to open the door from the inside is to press the handicap, and not all staff responding are aware of that, leading to trouble opening the door.
She says it also caused problems for residents and visitors try to exit the building, if they dont already know how.
Dr. Jack Regehr, AHS, south zone medical director responded by saying the decison was made based on “operational best practice.”
THe registration clerk at the Bow Island Health Centre retired and the position was eliminated and those dollars went to other budgetory needs.
With files from Gillian Slade,Medicine Hat News
It was further reported by Slade that the doors are being opened later than 5.p.m, as there is a clerk sitting at the front desk letting people in until 8:30 p.m.
The Town of Bow Island passed their cannabis bylaw with the amendments made after a public meeting was held earlier in the month.
Camping accomodations will meant any tent, holiday trailer, motorhome, recreational vehicle or mobile shelter used for sleeping will be a private property to some one.
Private property in the bylaw meant cannabis and vapong cane be consumed on a property that is restricted the public for access and includes but not limited to a private dwelling or yard,garage, camping accomodation or any other privately ownedd living accomodation.
Under the prohibition section , it read that a person must not smoke or vape in or on any muncipal lands, faciliities, walkways, roadwaysm public place, whether its in a vehicle or not.
Foremost Fish and Wild Life office closed after the local officer retired in 2016 and the reduced work load.
Bow Island’s beloved Down Memory Lane columnist, Fred Mellen passed away on Oct. 26.

November
The Senator Gershaw Gators senior boys volleyball team had undefeated season after winning zones and provincials on top of a 5-0 and regular season. The boys’ won silver the last two seasons.
The regional waterr pipeline from Foremost to Manyberries had hit a bump in the road on the Etzikom to Orion stretch becasue there is a section that is considered Public Lands, where the County of Forty Mile submitted an application a year ago to finish the project and never heard back.
The delay has contractors being held up.
Public Lands are held in trust by the provincial government and managed in the public’s interest and is a safe haven for wildlife and ensures security landscape for headwaters.
Bow Island goalie Bodee Weiss won the Southeast Athletic Club Tiger team Most Valuable Player award at the annual Hockey Hounds Major Bantam Hockey Tournament.

The annual St. Michael’s School fundraising supper raised $34,000 for the school programs through a silent and live auction on Dec. 7.
At the annual sugar beets banquet, it was announced that local sugar beet growers brought in 170, 126 tonnes per 30.40 acres of the crop.
The Joy of Giving Campaign was experiencing low number of non-perishable items for the Christmas Hampers.