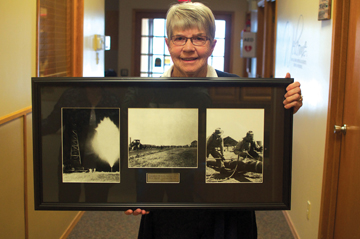 The Golden Age Centre has hung two pictures on their wall of a piece of Bow Island’s history, thanks to a donation from a local elderly couple.
Frank and Anne Vander Broek’s son- in-law Doug MacDonald had bought two photographs online of Bow Island’s first gas well in 1909 that were previously hung up in Calgary’s Shell building and gave them to his in-laws as a gift.
“We decided it would be a great place at the Golden Age Centre, so every one in the community can enjoy and also the visitors that come to the centre” said Anne.
The one picture has the article on how Bow Island’s gas industry arrived, while the other has the gas well workers on the pipeline and the train transportation.
The article snippet described a guy by the name of Eugene Coste, who was an Ontario geological engineer and an experienced gas pioneer, who had a vision of supplying natural gas to southern Alberta cities and towns. He thought there was an endless supply of natural gas in the town and then contracted out CPR to locate gas reservoirs. As a result his team made a major discovery in Bow Island.
In February 1909, the crew were apart of the initiative of Alberta’s gas era, Bow Island No.1 or “Old Glory.” This discovery would lead to a field that supported southern Alberta for decades.
“We thought it would be great idea to be brought here because we get a lot of elderly people and they remember the gas well story,” said Lisa Braat of the Golden Age Centre.
Braat said the local history preservation is not lost because there are several photos in the tourist building and the town office. The story is published in a book.
“We don’t want it to die,” she said.
“We want people to know the history of Bow Island and how the gas well started and how it built Bow Island as a community. The seniors have to do it for the younger people.”