Elkwater Winter Festival ready for another snow pile of fun 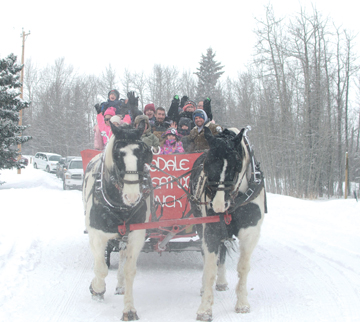 While snow falls looked bleak to begin the winter season, the annual Elkwater Winter Festival was never in doubt as snow flakes piled up over the last little while to have the fun day go ahead this weekend.
The event initially started five years ago as a part of the kick-off to the Alberta Winter Games Legacy fund that was left from the Medicine Hat event.
“It’s just been great to get families out and playing in the snow,” said Connie Matson, winter festival chair.
“ The look on the kids faces. The first time they’ve been out tobogganing, on a sleigh ride, the experience has been fantastic.”
The attendance has been consistent between 500 and 800 kids in the park, she
added.
“It was all Medicine Hat people coming out to start with,” she said.
“In the last few years, now we’re seeing the rural people come out. They are awesome supporters. They have all of sudden caught on.”
She said every year, the lack of snow has been a factor and it was no exception this year.
“(In) the first year the kids were tobogganing down the hill to a lake,” said Matson.
“They usually use machines making snow from the ski hill. This year we have a fair amount of snow out there. They’re packing it so it’s not melting.”
New activities this year are the chain carving demonstration and the Digital Star Light Lab at the learning centre are include in the day with horse drawn sleigh rides, cross-country ski lessons and snowshoeing.
A craft market will also take place at the Elkwater Community Hall with free face painting and popcorn, while a snowman building contest will commence at the Camp Cookhouse and General Store and cookie decorating at 12-34 Cafe.
Lessons begin at 9:30 a.m. for free skiing and snowboarding lessons for beginners (Ages 12 and under) at Hidden Valley Ski Resort.
Activities are free and will run from 11 a.m.- 4 p.m. in Elkwater on Feb. 2.