Bow Island brings in a plethora of visitors with unique experiences 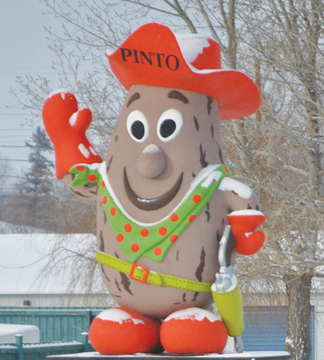 One of Bow Island’s ultimate tourist attractions has always been Pinto — the town’s beloved bean mascot. It was around 1988 — when Pinto was born, while another community project was in the works. “A lot of people stop to get their picture with Pinto,” said Terrie Matz, town council representative and past chairperson of the Bow Island Tourism Committee.

A committee was assembled and it included Mary Fleming, among many other invaluable members — the infamous Bow Island bean pots were born. “The committee wanted to find a way to give the town a ‘lift,’ as Mary put it and promote the various types of beans grown in our community. They started with garbage cans around town. The garbage cans were painted white with a picture of Pinto on them. They arranged to have the town water tower painted. This was done by the Siggelkow family,” according Matz.

Matz explained the bean pots were made of tractor tires turned inside-out and painted. “The bottoms were filled with plywood to provide a bottom surface and ‘junk’ to provide drainage. Mary’s husband Jerry then drove around with a loader and filled the pots with farm dirt and feed lot ‘enhancement.’ The handles were added in the second year to make them look more like a bean pot. At that time, Mary planted each of the pots with between $20-$25 worth of flowers.”

This endeavour, Matz added, was a chamber of commerce initiative and the businesses in town paid Mary for the flowers planted. “The businesses watered the pots planted on their property,” she said, adding Mary ran a hose from a resident’s house once a week to water the pots on the highway. Another resident watered the pot on the Huck Finn’s lot.

“The Pivot Fair used to give out a prize for the best bean pot of the season. At that time, there were approximately 25-27 bean pots in town,” Matz said.

Mary was also known about town as a great bean baker and would provide baked beans for many of the events held throughout the community, Matz said. “They were known as ‘Mary’s Beans.’ When the Ag Society opened their office in town there was a grand opening ceremony and Mary baked 4,000 bean tarts. They were displayed everywhere Mary said. There was even an article in County Woman Magazine with pictures of Pinto and the bean pots.”

Matz said the committee also planted a flower garden at the Visitor Information Centre — which was maintained by a local resident and then later on by Mary. “This area is now landscaped with rock and two bean pots.”

One of Bow Island’s strengths business-wise for tourism, Matz noted, is the town’s Rolling Pin Bakery. “Because it’s well-known. People say if they’re driving from Lethbridge to Medicine Hat, they go ‘we’re going to go for lunch in Bow Island.’”

Matz said Bow Island has one of the nicest golf courses too and Centennial Park is a tourist hot spot. “There’s about 20 campsites out there and we’re putting more in this year. The last two summers it’s full non-stop.” And there’s the Blues at the Bow and the town’s annual children’s festival in June.

According to Matz, the chamber of commerce has started the Market in the Park in July and August on Wednesdays. “That has been an unbelievable success. People coming from all over for it because it is good cheap food and there’s usually entertainment of some type.”

Bow Island, and it’s no surprise, is also known for its crop diversity. “There’s mint grown here, there’s beets and there’s potatoes — there’s everything,” she said. “Within a 10 kilometre drive, almost every crop in southern Alberta is grown here,” she said.

With Bow Island being a hub for agriculture, it is home to a great technological/educational tool, as well — the C40 crop story — where tourists can visit and take a virtual pin tour in a field of local crops.“It’s an overgrown map and you click on things and get a picture and then a story about that crop. You can be parked outside a field and go ‘what’s that?’ and then click on the link and it will tell you,” she said, adding it was a unique Bow Island initiative started recently and completed by volunteers. “It’s still a work in progress.”