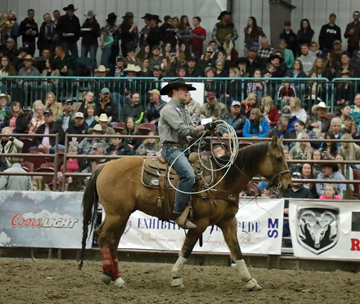 Medicine Hat’s annual Broncs and Honky Tonks Spring Rodeo was held last weekend and is a kick off for many riders to their rodeo circuit season.
Cypress County team roper Jared Pancoast says the first rodeo on his adopted home turf to begin the season is always exciting.
“If a person can have some luck at the very first one, it gets the ball rolling and a lot of the time you wait all year to try and get the ball rolling,” said Pancoast.
“If you can do it at the beginning of the year in your hometown, that’s pretty cool.”
However, the indoor scene provides a different atmosphere to that of the traditional outdoor arena.
“It’s really different being indoors,” he said.
“It just more confined. There are a lot of people, it’s noisy. It makes it a bit tougher for us to rope indoors.”
Pancoast considered himself to be a late bloomer as he did not start roping until he was 11 years old after growing up playing hockey and other sports before putting a sole focus into rodeo.
“I roped around here most of the time. My family wasn’t really involved in rodeo,” he said.
“It was a slow process getting in. I’ve mostly did it on my own.”
He credits his brother getting to know cowboys that really peaked his passion for the sport.
“They had a high school rodeo program that he started attending and (I’d) go and watch and see what they were doing,” he said.
“That’s what sparked my interest was watching that and that’s how I got involved in it.”
Pancoast says to compete at a higher level of team roping a rider has to have a good set of horses underneath them.
“Just lately I got mounted a lot better on better horses and I spent my whole life making my own horses and starting from scratch,” he said.
“I always bought and sold and now I could get offered all the money in the world. I probably wouldn’t sell my good horse because I can’t compete without them.”
When he is not in the arena, he is a stock contractor and produces team ropings for his JP Productions business.
“I supply cattle at ropings all across southern Alberta, some in Saskatchewan,” he said.
“I have 250 head of Longhorns that goes anywhere from rodeos, jackpots (to) team roping schools.”
Pancoast says “Team roping in Canada has absolutely grown and it’s amazing how fast it’s growing.
“It has stepped up so big in Canada. Now there is guys making the NFR (National Finals Rodeo) or there is guys winning world championships from Canada.”