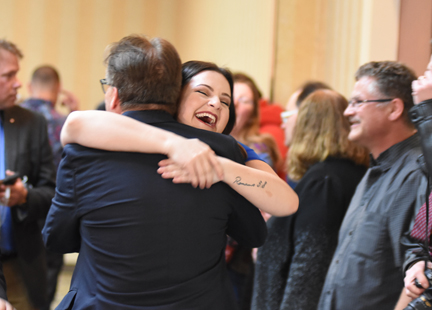 In Brooks-Medicine Hat the UCP’s candidate, Michaela Glasgo, was one of the first candidates to be declared a winner.By 10:30 p.m. on election night Glasgo had already garnered 54 per cent of the vote, reflecting a similar trend for the UCP across the province.“We’ve worked hard, we’ve earned every single vote,” said a visibly emotional Glasgo as she arrived at the UCP party at Medicine Hat Lodge where several hundred supporters had gathered to celebrate.Glasgo said her approach to the election campaign had been to stay humble, avoid any mud-slinging and remain focused on the issues ,which she said were jobs, the economy and pipelines.“We never strayed from that message,” said Glasgo.She believes her efforts, along with her campaign team, to knock on the doors of constituents contributed to her success. She revealed her team had even been door knocking until 4 p.m. on election day.“They said, ‘you came to my door. I’ve never had anyone else come to my door’,” said Glasgo.When Glasgo stood at the podium and talked to supporters she called it “the craziest moment” of her life. She believes people saw “hope” in the UCP.“”Wow, what a victory for Alberta. Hope is on the horizon,” said Glasgo.To ensure her constituents in this large riding have access to their MLA, Glasgo has committed to having two constituency offices – possibly one in Medicine Hat and another in Brooks.The runner-up in the election was NDP candidate Lynn MacWilliam who received 32.6 per cent of the vote.MacWilliam, who lives in Bassano, said a highlight of the campaign for her had been all the people she had met.“It’s just been wonderful, really, really good,” said MacWilliam speaking of supporters, volunteers and the people she had met while knocking on doors.Running against two conservative candidates, including Todd Beasley, the independent candidate who had been disqualified from running for the UCP, MacWilliam says she thought she had a chance of winning.“I thought I’d slide right up the middle,” said Mac William. “That didn’t happen but I still came in second … I’m not complaining about anything.”In the 2015 provincial election there were only 370 votes separating the winner Bob Wanner for the NDP, who had 37.9 per cent of the vote, and runner up Wildrose candidate Val Olsen with 35.6 per cent.Other candidates in that race for the Medicine Hat riding, before the electoral boundary changed, Blake Pedersen who had crossed the floor from the Wildrose to the Progressive Conservatives received 21.1 per cent of vote, according to Elections Alberta official data on its website.Jim Black ran for the Alberta Party in 2015, as he did in this election. In 2015 he received 4.5 per cent of the vote and on Tuesday night he more than doubled that number with 9.5 per cent of the vote.