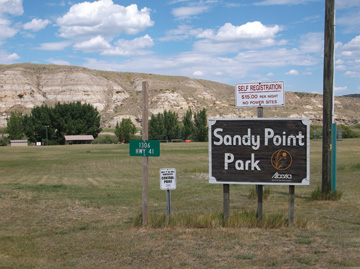 While Sandy Point Park boaters may have to wait another year to use the new boat launch, the construction by WSB Canada could start by late August if all the approvals go through.
“The expectation is that we’re hoping maybe we can get construction done in late August or early September,” said Jeffrey Dowling, Cypress County’s director of municipal services.
“Then just to try and get it in place and hopefully it will be fully operational in the year 2020.”
After the location was determined last year in the park, WSB Canada in conjunction with Action Lands assisted the county in submitting their application to the federal government for approval to go into the water to construct the boat launch.
“We received federal approval back in March to get permission to go into the water to build the boat launch,” said Dowling.
“We’re pleased the federal government felt that this project was going to be done accordingly to comply with environmental requirements and that it would be done in an appropriate time. (It) would have minimal impact on the water and its ecosystem. But what’s still missing from the equation at this point is we still need provincial approval for the construction of the site on land and through Alberta Environment and Parks. That’s what we’re in the process right now of trying to obtain through the assistance of Action Land and WSB Canada.”
It is unknown when those approvals will happen, added Dowling.
The design would include cement pads that boaters can back their boats into the water on and a floating dock.
The project has been in the works for three years in the park 30 kilometres north of Hilda.
In that time, the county reached out to some of the community members and it was immediately they wanted to provide funds towards the project.
“We got some funding from Special Areas, the provincial government through Alberta Environment and Parks and through a private donation from the Bader family,” said Dowling.
“The idea here was we wanted to cost share on the project of implementing this boat launch. With the funding in place, WSB Canada was the engineering company that did the engineering aspects and the project is in the ball park of $100,000, which includes the engineering aspect and the construction.”
The intent was to make a safer boat launch in a more desirable location, says Dowling.
“The county went ahead and looked at two sites that we wanted to propose to the federal and provincial government for approvals from an environmental perspective,” he said.
“We had a stakeholder’s engagement on two sites. The original site we were considering, it was determined that there was a better location which would be further downstream and right in the Sandy Point Park campground itself and that was a much more desirable location.”
Dowling says at best boaters might be allowed on the river in the fall.