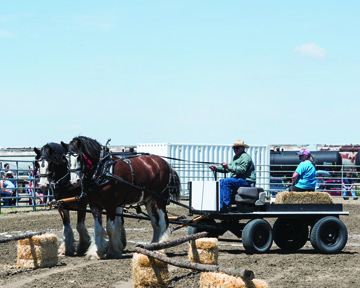 A chore team going through the log barrier obstacle course.

On June 1 at 1 p.m., don’t miss the Dunmore Chore Team Competition. Admission is $10 for adults and 16 and under are free. A Driving Clinic will be held June 2 at 1 p.m. Both events will be held at the Dunmore Equestrian Centre. For clinic registration call 403-866-1875. There is a $50 fee. Concession will be available.
“The competition all started in relation to what our forefathers did with horses,” explained organizer Glen Bishoff. “There’s eight stations involved in the competition course. It’s not a speed thing. It’s how you communicate with your horses.”
For example, Bishoff noted, with the first station a competitor drives up to a gate and drops their lines to the ground and then walks around the horses to open the gate, then the competitor goes back and picks up the lines and drives the horses through the gate and immediately the clock starts.

“It just relates to the communication between horse and teamster. And you carry on,” he added.

Competitors also hook on to a 16-foot log and proceed through a course. “The whole thing is only 17 feet and you’re going with a 16-foot log. Therefore, it’s precise. You can’t touch a rope or you pick up penalties,” he said.

Another part of the competition, he added, is the key hole station. “A wagon is waiting for you there. You drive into this key hole and you hook to it and you drive out clean without touching any of the lines. It’s only 28 feet in diameter,” said Bishoff.

When forefathers drove horses tight up against a railing or other infrastructure, Bishoff said, “They had to have great communication.”

Back in the day, area forefathers had to back up to loading docks, which is recreated at another station in the competition. Often, area forefathers also had to make sure horses and wagons were not sitting in the middle of any streets, while still hooked up. “That’s where it relates back to clearing the animals off the street. Just imagine a semi-trailer sticking out in the middle of the road. This way they are off to the side,” he said, in regards to another station in the competition called “fanning,” which Bishoff believes is the trickiest part of the entire course.

According to Bishoff, Chore Team Competition is a fairly new sport. “It started back about five or six years ago at Agribition in Regina,” as a fill in. A couple of teamsters, he added, were not part of the rodeo, but could put on a bit of a show — so, a new competition was born. Some competitors will be coming to the area from across Alberta and from the east.
“Two gentlemen, a father and son team, are coming here. They are friends of mine from Climax, Saskatchewan,” he noted. Chris and Marty Bertram won first place in the Agribition show for three consecutive years. “There’s a lot of teams over on the east side of the province.”
Chore Team competition in Regina started with just a few spectators, which grew to become a full-event show. The first show at the Dunmore Equestrian Centre last year had an estimated 300 at the gate, Bishoff said. He hopes attendance will double this year. “It seems the people really interested are the ones that had hands-on experience years ago with these horses.”
At the clinic held last year, Bishoff said, a lady came and only wanted to be around the horses. “She didn’t want to participate in any educational part of it.”
Equine therapy is also really picking up, Bishoff added, and that’s one area the equestrian centre would like to look into in the future. As for the big draft horses, according to some, the bigger horses are even more responsive to humans than dogs. “People just love to be around them and that’s why I’m thinking we’re getting such a good turn out. Plus, I’m getting a lot of younger people interested.”