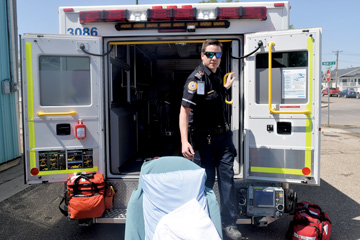 Commentator/Courier photo by Jeremy Appel Emergency Medical Responder Cam Willmer steps out of the ambulance he had on display for the First responders Open House in Redcliff on June 2.

The Town of Redcliff hosted an Emergency Services Open House on June 2, giving locals the opportunity to learn about the first responders who will come to their aid at times of need.
The event outside the local fire hall included displays from the RCMP, as well as regional firefighters and paramedics.
Dwayne Johnston, chief of the Cypress County Fire Department’s Irvine station, says the primary purpose of the event is public awareness.
“We want to make sure people know we’re here to help them and not be afraid when we show up,” said Johnston.
The open house had fire trucks, ambulances and RCMP vehicles on display, as well as equipment for attendees to test out, such as the firehose.
“That’s always a hit for the kids,” Johnston aid of the firehose demonstration. “Spraying water is always fun.”
Redcliff Mayor Dwight Kilpatrick, a firefighter of 22 years, was also in attendance.
He said the important work of emergency services has been on public display recently with the wildfires in northern Alberta.
“We don’t quite have that, but we can still have disasters,” Kilpatrick said.
Having attractions for the kids is a way to get their parents to come out and learn about emergency preparedness.
“We can reach more youth than we can adults, like through schools and other means,” said Kilpatrick. “On a Sunday afternoon like this, we’re hoping that families come, and the kids can play and the parents can pick up some information pamphlets.”