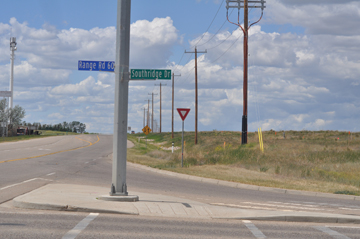 Alberta Newspaper Group Photo by Justin Seward The new Rotary Centennial Trail will connect from the existing South Ridge Drive path on the north side of South Boundary Road, all the way down to Desert Blume by the month's end.

The newly founded Rotary Centennial Trail that will connect Desert Blume into Medicine Hat along South Boundary Road is expected to start construction in mid-June after five years of planning.
The paved trail project is a partnership between the Rotary Club of Medicine Hat, Cypress the City of Medicine Hat will take over the ownership and maintenance of the trail.
Cypress County’ director of municipal service Jeffrey Dowling said. “The capital funding, maintenance and operation agreement between the Rotary Club of Medicine Hat, City of Medicine Hat, and Cypress County is still in its draft form for final revisions. Therefore, it has not yet been signed by the three parties. However, the county expects that it won’t be too long before it is ready to be executed by all three parties.”
Rotary Club president Chris Perret said the trail concept stemmed from the safety concerns on South Boundary Road with very narrow shoulders and accidents that have involved motorists with walkers and cyclists.
“We partnered with the city and county on what we can do to solve that problem and move forward with some trail,” said Perret.
The 1.5 kilometre trail will connect at the existing path on the corner of South Ridge Drive and run along the north side of South Boundary Road to corner of the Desert Blume subdivision before running down the west side of the road before linking into the subdivision’s existing trail network.
“We expect to get in the ground at anytime. We basically had all the contracts and drawings done over the winter months and we’re waiting for frost to lift,” said Perret.
“It’s progressed really well. We went to the city with some of the concept stuff last fall and from there went to various departments and got lots accomplished in a very short time frame.”
Dowling says the Cypress County recognizes the importance of recreational opportunities.
“We anticipate the trail will be very popular and will be appreciated by both municipalities for recreational purposes,” said Dowling.
“I think it’s a good opportunity for both municipalities to work collaboratively on this intermunicipal project. The county has slowly been gauging the needs and the desires of the residents for recreational opportunities. When it comes to the trail systems, we already have trails within some our hamlets such as Desert Blume and Dunmore.”
“I think our council is recognizing the trails provide a positive addition to the community. It enhances their need for getting out and getting physically fit and at the same time it provides the quality of life for those communities.”
The City of Medicine Hat saw the great value in the trail interconnection.
“It provides another key connection,” said Maureen Mudry, the city’s parks and recreation special projects manager.
“Even though Desert Blume is technically in the county, it’s just another opportunity for those resident to connect in the over 100 Kilometres of trails that the city has within its network. It’s a benefit for everybody. In addition people have used that road for walking and biking. It makes it safer for everyone.”
There will be three to four rest stations where there will be park benches set up that will be dedicated to landowner with a plaque who gave some land for the project, while garbage cans and a solar lit crossing from South Boundary to Desert Blume will also be set up.
The construction will be completed sometime near the end of the month.