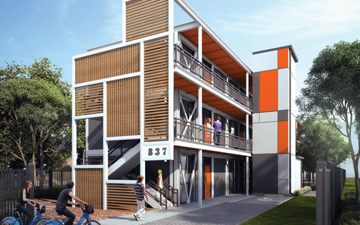 Scott Schmidt
Alberta Newspaper Group
The global energy collapse of 2015 left much of Alberta’s oil and gas industry reeling and struggling to stay viable in an evolving business world.
And for many companies whose businesses revolved around the needs of the industry, the sudden retraction in oil and gas development trickled down to threaten their very existence.
Bow Island’s TRU-CO has been making prefabricated modular structures and buildings since 2006, and for much of the company’s first decade, most if not all of its sales were to oil and gas companies. But when oil prices tanked, so too did the need for modular buildings for northern Alberta’s oilpatch.
Without some innovative thinking, TRU-CO wouldn’t have survived.
“With the downturn over the last few years, we’ve had to pivot and look at other opportunities to keep the factory running, and to keep busy and keep all the guys employed,” said Rhys Kane, vice president of business development.
The answer? “LEGO”-like affordable housing in the U.S.
“We’ve done a couple in the Calgary area, and southern Alberta, but with the way the U.S. dollar exchange is against the Canadian dollar, there was a real good opportunity to transport modules south of the border,” Kane said. “And with the Los Angeles market and California market, it’s very busy and lots of construction is required, so it makes a lot of sense for us to build in southern Alberta here and transport the modules down.”
The company had its Bow Island factory certified to California standards and is now focusing the bulk of its work in a new, growing direction. And it’s creating a lot of buzz these days with its current project for affordable — and stackable — housing in L.A.
Each unit is a repurposed sea-can, complete with kitchen and bathroom, and fully finished with insulation, flooring and painted drywall. Kane says even the toilet paper roll holders have been secured to the wall.
“By the time they leave our factory they are a fully finished module ready to go,” Kane said. “The developer on site is basically just playing LEGO when they get there.”
The modules stack together to make three-storey buildings, essentially apartment complexes, with 16 two-bedroom units, a manager’s suite and community room totalling about 9,000 square feet. What makes the project so perfect for TRU-CO, Kane says, is the idea behind the product is quite similar to what they did for the oilpatch.
“It’s the same principle — we basically create a box, and create within it a home that is 90 per cent complete,” he said. “The modules are really high level and much the same as what we were doing for the oilpatch.
“What we are trying to do is keep our factory busy, and we believe now that we’re poised to (take off).”
TRU-CO is now spreading its wings down south, taking on traditional wood-frame projects in other cities like Denver and Reno, and the demand for the company’s affordable-housing services is surpassing what it was doing for oil and gas. The pivot not only saved the business and saved jobs, it has actually opened doors that could vault TRU-CO to places it couldn’t have imagined only a few years ago.
“Modular construction is a real booming thing in the U.S. because their construction market is so busy, and they are a lot of people retiring out of that industry and not as many trades people coming in,” Kane said. “So they’re looking at ways to keep this new building demand going.”
Kane says by building almost entirely in factory offers a consistency, and more importantly, an efficiency that can keep up with demand. Factor in a favourable exchange rate, and the sky is the limit for TRU-CO.