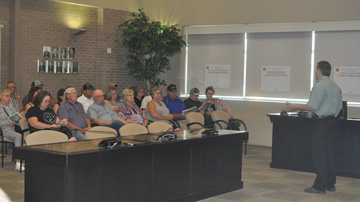 People that were curious about the Dunmore recreation facilities sat in on presentations from the proposed arena/training facility and equestrian centre indoor arena representatives on July 30 at Cypress County's council chamber.

Cypress County hosted four open houses around the municipality to seek the public’s input on the proposed Dunmore Equestrian indoor riding arena and the Prairie Rose School Division-led hockey arena/training facility on July 29-30.
The open houses were meant to give Cypress County council a better picture in their decision making of supporting the projects.
Prairie Rose School Division is asking the county to contribute over $5 million to the $10 million hockey arena/training facility building cost and 50 per cent of the annual deficit costs which is set at $83,000.
The Equestrian Centre proposal is for a multi-use indoor horse riding facility where the organization is requesting $2 million in capital funding from the county.
“Council wanted to go out to the public to see the public’s views on it and that will be the first step,” said Cypress County’s Chief Administrative Officer Tarolyn Aaserud.
“Council will see the temperature of the community and go forth with other decisions and motions in the future.”
After attending the four open houses in Irvine, the two at Cypress County’s office and one in Seven Persons, Aeserud’s consensus was that the county needs these facilities to enhance recreation opportunities.
“Recreation is important,” she said.
“But doing it in a affordable sustainable manner. People realize that we need recreation and they really appreciated having the chance to participate in this process.”
Aaserud says at the Irvine stop, it was important to note that the arena is vital to the community and that the county will wait and see once the comments come out to see what impact a new Dunmore facility would have on their existing arena.
“The official comments on the stickies will be awesome to see,” she said.
Aaserud said “the county felt “very good” about the consultation.
Dunmore Equestrian Centre president Blair Reid says it’s been rewarding and gratifying after the work the organization put in over the last six years to get to the consultation stage.
“You could see positive input coming from the county and the public consultation was very good,” said Reid.
“(And) getting comments from various people, a lot of them I don’t know, and so they’re new people to the project. That was very gratifying. I think there is a lot good information coming out to the public that the survey people put together for us. It’s positive.”
Reid added that when they started six years ago there was not a path out to the arena.
“But with the hard work of our volunteers we have a first class facility and we want to turn that into an indoor and outdoor facility, which we feel this fall is going to take a real positive step when this survey is complete.” he said.
Prairie Rose School Division deputy superintendent Kal Koch spoke on behalf of the school division.
“Tonight it seemed that we had more people in favour of it. But we also had residence of Dunmore come in not happy with it being built on the site where it’s at,” said Koch.
“When we went out to Seven Persons it was more of a neutral crowd. When we went out to Irvine, the Irvine people felt that our proposal was going to jeopardize their skating facility.”
Sage Analytics consulting laid out three sets of question for each facility at the open houses which included the benefit of each facility and on how often people intend on using the facility.
“They’ll have the opportunity to put stickers on the board to gauge their level of support, said Shari-Anne Doolaege, who headed the analytical team for the studies.
“Also we had an opportunity for them to fill out the online survey if they haven’t done that already.”
The information then will be gathered from the open house and survey and be brought back in a report to county council at their Sept. 17 regular meeting.
More information on the projects and the survey can be found http://www.cypress.ab.ca/public-consultation.