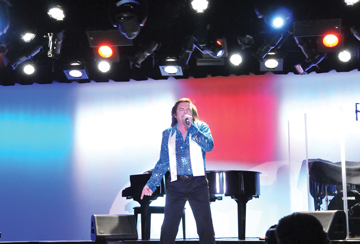 Local Neil Diamond fans will not have to wait long to listen to his music, as in a couple weeks time Jason Scott’s “Diamond Forever a Celebration of Neil Diamond” tour makes a stop at the Redcliff Legion on Oct. 19.
“It’s a one man track performance,” said Scott.
“It’s not an impersonation at all. I was in a motion picture documentary where I got to know five other members of Neil Diamond’s band. They sort of passed along that Neil would rather that we have fun with his music, put our own twists on our performances and make them ours.”
Scott says the Diamond Forever show is entertaining, informative and super fun.
“The whole presentation is delivered as an audience that interact (a) Las Vegas-style show,” he said.
“The folks in the audience are going to have certain duties to perform throughout the course of the show and if somebody is on their cell phone and not paying attention, then we’re going to have our way with them.”
The audience will be able to go along with clap along songs, song origins and participate in a dance contest.
“There really high quality studio tracks, he said.
“There’s live guitar, a Neil Diamond vocal stylist, sparkling outfit. But the show creates a look and feel of Neil Diamond and of course it presents the most iconic Neil Diamond hits. I have a blast performing this show.”
Scott has been performing for over 20 years, but for the last 17 years he has been working exclusively with Royal Canadian Legions (RCL).
“The proceeds raised during the event go to the RCL,” he said.
“The show is in such high demand through the families of the Royal Canadian Legions across Canada. It’s hard for me to get to everybody.”
Scott’s musical talents began being recognized at the age of five where he attended the Conservatory of Music in Toronto where he received first degree honours and graduated by the time he was 15 years old. When he was in his 20s, Scott toured extensively with nightclub and concert bands and when he reached his 30s, he was a Canadian record label signed recording artist writer and performer.
In 2005, he was the first ever Canadian international performer to win “Be a Legend” celebrity tribute artist competition as Neil Diamond.
Scott was awarded the Sunburst Convention of Celebrity Tribute Artists “Best Platinum Showcase Award.
He also went on to win second place as a Vegas Trbiute Artist and was invited on as the opening act for Country Superstarts at the Golden Nugget showroom
The British Columbian was also a part of the feature length motion picture Diamond Mountain back in 2015, which was filmed all over the world.
Showtime is Oct. 19, 7 p.m., at the Redcliff Legion. Tickets are $25 and can be purchased at the Legion.