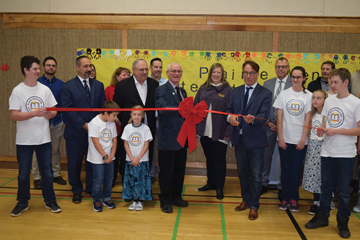 While the Prairie Mennonite Alternative School staff and students have been in the their new school since the beginning of September, Friday was a chance for the school to have a grand re-opening of their new digs in Medicine Hat.
Students and faculty had the opportunity to showcase their new home, the old St. Thomas D’Aquin building, in front of representatives from the three local school districts, family, friends and Cypress-Medicine Hat MLA Drew Barnes.
The new school replaces the Redcliff Mennonite Alternative Program (RMAP) School which housed the students for the past six years, but had tight confines and limited resources for the kids.
“It was wonderful,” said school principal Tracy Frank.
“Obviously anticipation built over the summer to get the kids here. (The) best day was having them come off the buses the first day. We’ve now been here a month. They’re loving the playground, loving the gym and we’re settling in nicely.”
Frank says there a lot more opportunities to do hands on things in the new building and more programming benefits.
There was instantly more space and resources available when the group made the move.
“When we asked the students what they wanted a couple of years back, they initially said ‘We want a library.’ We got the library,” said Frank.
“Then to find out about the gym space. They were excited about that and the playground.”
None of these options were available at the RMAP campus.
Prairie Rose School Division superintendent Roger Clarke says this day was about the kids having a lot of pride in their new environment.
“You can see on their faces when you talk to them, they’re happy to be here,” said Clarke.
Clarke says the transition went smoothly from RMAP to the new school.
“Obvoulsy getting a building passed over from one school divison to another is a bit of a process.
“Medicine Hat Catholic Board of Education were very helpful and they were pleased with the transition too to service these kids.”
PRSD had to bring in maintenance and technology staff to get the building ready over the summer and re-route bus routes for the kids to come in the city, which the school division is working on funding for with the Education Minister.
Grade 5 student Adiena Wall spoke in front of the packed gym about the transition.
“I’m so excited that we have a new school,” she said.
“The other school was fun but it wasn’t exactly big. I want to graduate. My sister graduated from RMAP and became an EA (Educational Assistant) at the school. I don’t know how long she was an EA, but it was fun having my sister at school.
“I have very good teachers and the best principal in the whole wide world.”
RMAP is functioning because of there are still high school students taking night classes in the building.