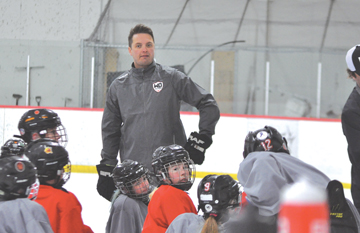 The Willie Desjardins South Alberta Hockey Academy has added yet another Medicine Hat Tiger alumnus to the coaching staff.
Former Tigers’ forward Stefan Meyer joins Emerson Etem as the other former tabby to join the hockey academy’s coaching staff.
The Fox Valley, Sask., native had various stops in the pro ranks after being drafted by the Florida Panthers and stints in Europe after leaving the Tigers in the mid-2000s before hanging them up in 2016 to come home.
He learned about the gig by staying in touch with his old coach and academy founder Willie Desjardins.
“We kept in contact,” said Meyer.
“We didn’t  talk  much hockey. We always told some stories between the two of us because we had won a championship together and when the academy started, I would be lying if I said that it was always in the back of my mind eventually to try and pursue it. We both brought it up at times and didn’t think anything of it . It was evident when he came back to coach with Tigers and he’d be around the community that I’d be wanting to work on a closer level with them. I’m fortunate enough to be able to be in this position now.”
The transition from player to coach he hopes to instill in the hockey academy players will be much of what Desjardins taught him.
“I could speak on behalf of a lot other good players I’ve played with that are now into coaching. It going to be pretty monotonous because you’re going to get a guy like myself, my philosophy is the same as Willie’s because I am big a Willie fan,” he said.
“You’re going to see a lot of the same drills, alot of the same way that things are portrayed and preached because I think it’s just a healthy mentality that is great for these kids. They’re very fortunate to have this in front of them because when I was their age I wish I would have had that as well.”
His fondest memory of being in the black and orange was that 2004 championship run.
“The two years previous we weren’t a playoff hockey team,” he said.
“Then the mustache man shows up and the next thing you know we win the league within two years.”
Desjardins shared his thoughts via text message about Meyer joining the academy.
Stefan Meyer is a great addition to the South Alberta Hockey Academy,” said Desjardins.
“He knows what it takes to be a player. He has played in a lot of different situations(NHL, AHL, Europe and WHL.) Above all that, he is just a great character person with really good character.
“He was a great teammate and he’s a great guy on our team. Stef was certainly a big part of our championship team in 2004. He will be a great mentor for our players.”