Sugar beet farmers will be OK despite snowfall 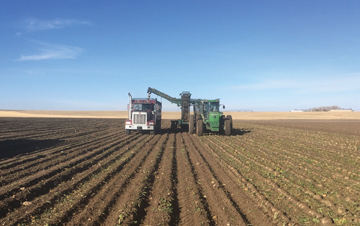 The sugar beet harvest in the County of Forty Mile region got off to a strong start in September.
However, the recent snowfall put operations to a halt for about a week as harvest is expected to start up again sometime this week.
“The sugar beet harvest started around Sept. 12, “ said Bernie Lyczewski, president of the Bow Island and Burdett Sugar Beet Growers Association.
“They were trying to get some mini harvest beets in so they could get the (Lantic Sugar) plant started early. They were pretty much open until the snow came here last weekend. They got in quite a few tons. The plant is up and running (since) Sept. 20.”
Lyczewski was not surprised by the common weather trend that hampered the harvest a bit.
“We had this weather last year and we had some good weather after,” he said.
“It’s a little bit of a concern but hopefully we get some windy, dry weather so we can get started by (Oct.) 9th or 10th.
“The problem is it just slows everything down. It’s a lot more difficult for the pilers to separate the mud when it’s wet like this and trying to get around the fields with trucks and digging equipment. We’ll have to let it dry down a bit.”
With the weather woes aside, the crop looks like a decent one this year.
“They’re talking about 100,000 tonnes,” he said.
“That’s probably 3,000 acres that were taken over before . A majority of the crop is still out there.”
He expects another year of 28 to 30 tons per acre.
“Most of the people I talk to (have) hard indications the crop is quite good again,” he said.
“But we don’ know until we get in the field with equipment.”
Local sugar beet grower Steve Wikkerink had participated in the early dig program a couple weeks prior to the snowfall,but like most other farmers has had to wait until the ground dries out.
“We really weren’t digging deep yet,” said Wikkerink.
“Even before we started the main harvest. But I think now that we won’t be able to do beans right away, I think as soon as they receive sugar beets again, we’ll start digging and take some more beets out until the beans get dry enough.”
Wikkerink says prior to the snowfall they were able to do fieldwork right up until part way through Saturday.
“Eventually it gets too wet and you have to shut everything down,” he said.
“We ended up giving the guys Monday off. Give them a day off now or two days off because when we get going it’s going to be busy. Now we ‘re back working in the shop and doing some more service work on the beet equipment and getting the trucks ready to go for the run.”
What his farm dug up so far, they were pretty pleased with, he added.
“I think on the sugar beet side some acres got affected by that big hail storm a couple months ago, he said.
“But I think the rest of them, driving around the country side, they look good. I think guys are eager to get into them and see what’s out there.”