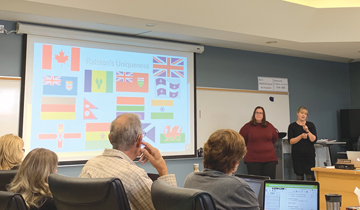 Ralston School principal Stacey Nunweiler and exhange teacher Sonia Stanton spoke to PRSD's board of trustees about how the school is trying to implement a community feel at the institution.

Ralston School representatives visited the Prairie Rose School Division (PRSD) board of trustees to talk about ways the school has been giving a sense of community to their students on Oct. 8.
“This is to help build resilience for our students who are in a very transient population,” said Stacey Nunweiler, Ralston School principal.
The school has a new literacy focus with a priority on writing.
“The reason we chose writing is because with the children coming in at their different starting points, the expectations from parents on where their children are at as far as writing is concerned is different,” she said.
“We have to have data and to show them where they’re at so that we can bring them forward instead of keeping them where they’re at. Some of our parents are concerned when they transferred
out that they won’t necessarily be at the level they need to be going into a different school. We want to make sure they’re progressing academically in our school”
A writing program was developed along with PRSD learning coach Cathy Hynes, where Ralston School uses a feedback system with stars and stairs.
“A star would be something that child has done really well in and a stair would be something they can approve upon,” said Nunweiler.
“We use writing exemplars that we’ll show the children what we’re expecting as far as an end product.”
It is after projects are complete that comments are made through the stars and stairs and rubrics.
Parents can see their kid’s progression through the Seesaw app program which is a platform for student engagement and students can show their work through photos, videos drawings and text.
“Parents have the opportunity to community at the bottom,” she said.
“And also pictures of work that the kids are doing creates a lot of clarity to families.”
She says the community feel is not limited to just the school, but to the Ralston community too and programs that include both are the One Picture School-wide project where students will look at a picture and base a project off that photo.
School dances are popular and well attended, military bands come in do performances, parents and students face-off in hockey games and the school also had a cultural potluck last week.
Sonia Stanton is an exchange teacher who assists in teaching the kindergarten classroom and help Commonwealth families as well as Canadian military families transition into Canada and back to wherever they going.
“That has created mobility for our families because what you might not understand is the classroom is very small in nature comparatively saying to Canada,” said Stanton.
“We have different starting points and curriculums in Scotland, England, Northern Ireland and we come to Canada and have new curriculums again. Our families get upset because nothing looks the same. We are looking for segments. What that translates to is little things that might not be a problem in any other school in your division, become a problem for our school.”
Stanton says a misconception is the Canadian curriculums is lower than the British curriculum.
“Our different starting points arise from being in school longer,” she said.
“So our children enter kindergarten, sometimes they’ve been in school two full years with the teacher … The challenge for the staff I work with is to make sure they understand where the starting points fall for the children.”
“ What’s very upsetting for families and children is when you start with the beginning because in Alberta that is where we start in kindergarten when actually they’ve been going for two years already.”

Legal name change
PRSD’s secretary treasurer Ryan Boser informed the board of trustees that the school board’s legal name has been changed to meet the new requirements of the Education Act. The official name will be called Prairie Rose School Division, dropping No.8.

Enrollment
Boser presented the overall enrollment numbers for this year. The school division is up 13 students from last spring’s projections. However, PRSD is still down 5.5 students compare to last year’s enrollment. Boser noted that with academies and new programming have helped with the enrollment stability.